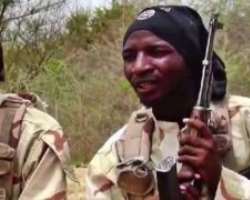 Shuaibu Moni, who was released by the State Security Service, SSS, last year in a prisoner exchange deal with Chibok girls, was the coordinator of the multiple Easter attacks in Maiduguri, informed security sources have said.

Less than three days after the swap of 82 Chibok girls on May 7, 2017, and alleged payment of €3 million ransom for the release of five commanders from the custody of the SSS, a video of Mr Moni appeared, threatening the Nigerian state with continued attacks and suicide bombings.

Mr Maitangaran a well-known senior commander of Islamic State of West Africa, ISWA, “has been on the Service and Nigeria Army radar since 2012, when he spearheaded the armed attacks on the office of the Assistant Inspector General of Police (AIG) Zone I, on 20th January, 2012, as well as other public places in Kano. MAI-TANGARAN was also responsible for the deadly explosive attacks against worshippers at the Kano Central Mosque as well as an attack on a military formation in Yobe State in 2015, which claimed hundreds of lives.”

But inside sources said Mr Moni has now opened the third splinter group in the Boko Haram terrorists' end-game of kidnapping and suicide bombing against the Nigerian state.

“Credible intel available to us shows that Shuaibu Moni coordinated the Easter attacks. He is now leading a subgroup with expertise in hostage-taking,” said a source who preferred not to be named.

The deal for the release of Messrs Moni and Maitangaran come under intense criticisms locally and internationally following allegations of corruptions against the mediators.

The unending hostage-taking by the terrorists, the swap and ransom payments process have further deepened doubts and skepticism on the sincerity of the deal.

The often cited International Committee of the Red Cross involvement in the negotiations turned out to be false, in a statement issued on February 22, 2018.

The agency had said that it only acted as an intermediary between the Boko Haram and the Nigerian Government in the provision of its vehicles used to transport the freed girls to Nigerian officials at Banki town in Borno State, North-East Nigeria.

“With the agreement of all the parties involved, we acted as a neutral intermediary to facilitate their transport back,” added the ICRC.

Inside sources told this newspaper that immediately after the first swap of Chibok girls with Moni and co fighters, the group has carried out more than fifteen suicide bombings and armed attacks in IDP camps.