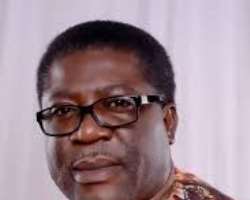 The Deputy Governor of Imo State, Prince Eze Madumere has charged leaders and parents to train their children in the way of the Lord so as to instill in them good morals and disciplined, a task he said will equip for leadership.

The Deputy governor made the call earlier today during the investiture of the President of Boys Brigade Nigeria, Imo State Council, Lady Edith Onyejiaka and other state officers of the organization at All Saints Anglican Church, Owerri, Imo State.

Prince Madumere who is also the State Patron of the State Council of Boys’ Brigade said his choice to associate with the organization is not unconnected with its vision of grooming and mentoring the young ones into determined, focused and responsible citizens.

“I chose to align myself with this great body because it is well designed special platform to grooming our youngsters into good citizens and leaders with high moral standards. While we were still very young, I learnt discipline, determination, morals and leadership qualities in Boys’ Brigade. Our bible says; train up a child in the way he should go and when he is old he will not depart from it.”

The number two citizen of the State used the forum to charge the newly invested to be courageous to confront the hydra headed monster of immorality ravaging the society. He said the continual rising of social vices and its acceptability in some quarters is and index of a failed society.

He therefore charged the new leaders of the organization, parents and other members of the society to join hands to ensure the dangerous trend is reversed to avoid a gloomy future that will be regrettable.

The visibly worried Deputy Governor of the State in his analyses with the media said:”I am worried with the ugly trend of truancy, lousiness, immorality and other vices among our youths because they constitute about 66% of over 180 million Nigerian population. This is a frightening figure if we failed to harness them properly and make them productive. They can make a huge resource if we invest wisely in them, be rest assured what it will trickle to. Charity begins at home. You can understand the huge responsibility we have at hand. So, it calls for carefully designed programme that will keep them busy and add value in them. I am ready to take the lead as the State patron to work with everyone as a team to achieve a desired goal;” he enthused.

He therefore called on the Church and other relevant agencies to key into the project of grooming and mentoring the youths of Nigeria must be converted into a veritable resource for sustainable growth and development of the nation.

High point of the event was the presentation of various award plaques to the deserving members of the Church and Boys’ Brigade Nigeria, Imo State Council by the Deputy Governor who charged them to remain consistent in their avowed crusade of grooming the youths into good citizens and future leaders.

Special Assistant to the Deputy Governor of Imo State