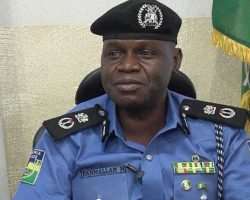 Police in Enugu State said a herdsman has been arrested by its operatives with Ak-47 rifle and 7.62mm ammunition at a farmland located at Isigwe Ugbawka in Nkanu East Local Government Area of Enugu state.

Sunday Sun learnt that the timely intervention of the police in the area saved what would have possibly been another massacre in the community as herdsmen had already invaded the farmland.

It was gathered that somebody from the community saw one of the herders with the AK-47 rifle and contacted some members of the community who immediately alerted the police and equally mobilised the community to monitor their movement until police arrived and arrested the one carrying AK 47 rifle.

The police spokesman, Ebere Amaraizu, a Superintendent of Police, in a statement issued Saturday, confirmed the arrest. He noted that the Commissioner of Police in the state, Danmallam Mohammed, had visited the community and the farmland in company with some of his men and notable indigenes of the community among whom are Comrade Fidelis Edeh and the councilor representing the ward, Hon Peter Edeh. According to Amaraizu, the Commissioner commended the effort of the community with their timely and useful information which led to the arrest of the herder and the recovery of the arms.

“The Police Commissioner has maintained that his command must continue to partner with communities under community safety partnership of the community policing to ensure that our communities continue to remain safe and secure since security is everybody's business and requires collaborative effort”, the statement reads. Danmallam disclosed that the suspect was already helping the police in their investigations. The police spokesman quoted the Chairman of Nkanu East Local Government Area, Hon Ikechukwu Ubagu and other members of the community to have thanked the police for its timely response to their call which led to the arrest and the recovery the arms and ammunitions. They assured the Commissioner that they would continue to partner with the police to ensure that there was no tension in the area while the farmers continue with their work without any fear.