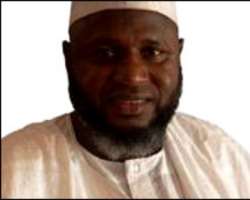 
This afternoon (June 9, 2010), I read in an Online Publication, THE WILL, a report titled "Yerima’s Child Bride: Muslims Plan One Million March". I write this in response to that publication and the utterances and position credited to Dr. Is-haq Akintola. I do not write to join issues with him or anyone else. While I am not in any way, directly affected by the alleged Marriage between Sani Ahmed Yerima and an Egyptian 13-year-old child, I deeply feel concerned as a father and rational person, and a Nigerian. I therefore respond in the above capacity.

The gist of that article is that a group referred to as Muslims Rights Concern (MURIC) "announced the plan to embark on a one million march at a press briefing held at the Ladi Lawal Press Centre in the State Secretariat of the Nigerian Union of Journalists (NUJ) if the National Assembly continues the probe of the marriage" between Sani Ahmed Yerima and a 13-year-old Egyptian girl. The group was said to have been led by its Director, Dr. Is-haq Akintola. Dr. Akintola alleges that the National Assembly is probing these allegations because it is acting out a Christian Script authored by the Christian Association of Nigeria (CAN) in order to persecute Yerima. He further posits that ‘Yerima "is undeniably a hero among Muslims having used the instrumentality of Shari’ah to liberate Nigerian Muslims. This is why he is being persecuted"‘.

I want to assume that both Yerima and Akintola are fathers. I do not know the degree of their commitment to their children, but if I were to assume that they feel half the way I do about my daughter; the way every rational parent does about their children, then the very idea of paying so much for a young child who does not even have the ability to consent, even if her parents were, in the name of marriage, should have been revolting. Is it fair to subject a child of that age to the rigorous obligations of marriage, which include sex, pregnancy, childbirth, post-natal care, companionship, domestic chores, and other such demands that all married people know of, without stripping her of her right to a happy life and security? Can a 13-year-old, for instance, efficiently receive friends, colleagues and acquaintances of an ex-governor and serving senator? If she were to participate in an association of wives of ex-governors or sitting senators’ wives association, how well would she fit in? Can she be the ‘Mother’ of Yerima’s constituency, if the need arises? How many of Yerima’s boys and constituents will gladly call her ‘Mummy’?

Dr. Akintola deliberately refuses to refer to this 13 years old as the child that she is, and prefers to refer to her as "an Egyptian lady". It is pathetic that a father should get up to defend such barbarism. How many contemporary educated and upper class Muslims today will give their 13 years old "ladies" to such grey-haired men for marriage? Would Dr Akintola or any other loving father, do that? Except, perhaps, for the ‘right price‘, were material benefits to the parents over-ride the rights and well-being of such a child, which might be the only reason why the girl’s parents may have agreed to such a deal in the first place. However, I want to believe Dr. Akintola, who is so protective of perceived orthodox Islamic values, would not descend so low as to sell off his beloved child for monetary benefit.

I hear that the government of Egypt refused to allow the marriage thereby leading to the decision to celebrate and consummate it in Nigeria. But the question is why did Egypt refuse to accept that marriage, though it is more Islamic as a nation than Nigeria? Why did "Muslim Faithfuls" and "heroes" in Egypt not march against their government for denying Yerima and the 13-year-old "Egyptian lady" the right to practise their religion, by refusing the marriage?

"Dr" Is-Haq should be learned enough to appreciate the full implication of such a marriage. I am assuming that the title of ‘Dr’ appended to his name means he either is a medical doctor or holds a PhD in a field of study from a competent institution. A medical doctor would know better. The health implications are a matter of public knowledge. A PhD would be both informed and exposed enough to understand the severe implications of such a marriage. Even if he were a Dr of Islamic law or Islamic Studies, he would know that religious laws are constitutionally regarded as customary laws. Moreover, in a federal democracy like Nigeria, the constitution is both supreme and sacred. Any custom that is in conflict with the constitution is null and void to the extent of the inconsistency. If Islamic teachings and traditions, or any other religions truly permit such an act, it therefore means that in the light of the constitution, such a law would be null and void. In addition, if therefore, in the name of 'Religious Freedom', we permit criminality and unconstitutionality, then we are doomed. The constitution will fail and our country will degenerate to anarchy and disintegration. Seeing how selfish human beings are, we will plead religion as a cover for every crime. I am sure that there are religions that not only permit, but also actually demand human sacrifice. Even if there was not, all a person needs to do is to start his. We can kill people and claim religious liberty.

Dr. Akintola also makes reference to certain recent incidents where one "Pastor Trybest Atonye defiled his wife’s 13-year-old sister just two weeks ago and… a randy pastor, Eke Mbah, aka Reverend Might, raped eight-year-old twin sisters". He accuses the women groups, who had earlier protested Yerima’s action, of not protesting when these ‘Pastors’ committed these crimes. I cannot defend these women. I think they should have. But then, I wonder how many of these women even heard about these cases he is referring to. I guess they just did not get the kind of media attention that Yerima did. Therefore, we can blame the media. But then, they say when a dog bites a man, it is not news as much as when a man bites a dog. I guess Yerima’s case can be safely said to be a ‘man bites dog’ piece of news, especially considering the fact that as a serving senator, the laws prohibiting that act can safely be said to have originated from him. When a grey-haired sitting senator and ex-governor marries a foreign 13 year old girl, paying in hard currency the equivalent of millions, any right-thinking journalist will make that front-page headline. The same way, if the National President of the Christian Association of Nigeria marries a 13-year-old girl, or any other Christian figure of national renown does, surely that will make front-page headlines.

But now that Dr. Akintola has publicly said he was aware of these ‘pastors’ offences, he should have also organized a protest to the relevant authorities. Why has he not done that? It appears it is not too late. It is my opinion that such a march would be more productive to Nigeria than the one he is proposing. I commit myself that I will join that one million-man march as the million and one person, if the march is against the 'pastors' that allegedly committed the alleged atrocities.

On the allegation that the National Assembly is acting out the script of CAN, it will be a direct assault and indictment on the integrity, independence and religious maturity of every Muslim in the National Assembly to accuse them of having agreed to act out the Script of one segment of the country without a single protest, especially if it went against the hopes and aspirations of their constituencies. I know for a fact that the Speaker of the National House of Representatives is a Muslim, and he is the no fourth citizen of the nation. Ditto for most, if not all of the legislators from the core-northern states. Many southerners there are also Muslims. Where these honourable legislators to suddenly sell their mandate and constituencies, then they do not just cease to qualify to represent their people, but their ability to further hold any public office would be brought to question. However, if the legislators are performing their constitutional duties, then they should not be intimidated to stop by whipping up sentiments. If Yerima’s rights are infringed upon by his colleagues, he can go to court to get a restraining order against them.

It is also disheartening that some people are quick to employ cheap intimidation when they are losing personal/political struggles, or are caught in the web of criminality, or are pursuing selfish appetites by threatening to destabilize national security. Dr. Akintola is reported to have said that 'continued persecution of Yerima "constitutes a potent threat to peace in this country," '. This is a clear effort to whip up the polity and Islamic religious sentiments in order to cause further destruction of lives and property. If the State Security Service (SSS) will quiz Mr. Independence Ogunnewe for engaging in an in-house political brawl with the Speaker of the House of Representative, Dimeji Bankole in the name of threat to national security, then this is clearly a greater threat to national security as it is a clear call on Muslims to upset our national equilibrium.

Yerima should not be allowed to insult the national integrity of Nigeria. MURIC should not allow Dr. Akintola to be used by Yerima to lead them into a wrong and unconstitutional pursuit. Let us call a spade a spade. Let us call a crime a crime. If Yerima truly married a 13-year-old girl, paying so much, then it is either child trafficking or slavery. Even if it is permissible by Islam, as they would have us believe, it is still offensive to common sense, acceptable moral codes and natural justice.