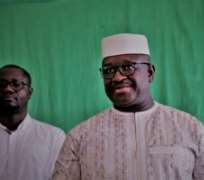 Less than 24 hours after opposition Julius Maada Bio was sworn-in as President of Sierra Leone, some of his supporters have engaged in violent activities.

The violence erupted in the eastern Sierra Leonean district of Kenema, after the installation of Bio as the country's fifth president.

Reports out of the town on Thursday suggested  running battles between irate youths and the police.

A police station was reported to have come under attack.

Reports also indicated multiple injuries, some as a result of gunshots.

A source in Kenema told APA that jubilating supporters of the Sierra Leone People's Party (SLPP), whose candidate Bio was declared winner  of the presidential election, went on the rampage trying to attack the residence  of a minister in the outgoing government.

A video footage shared on the social media platform, Whatsapp, shows angry youths mobbing a police officer, while a second officer ran for his life.

The clashes were happening as the newly elected President Bio met with former President Ernest Bai Koroma at State Lodge, for the first time since he was sworn in to office.

The two, according to state officials, discussed details towards a smooth transition.

There have been calls for Bio to act on what's his first test of security challenge as a president.

Meanwhile, President Bio is scheduled to convene his first major engagement as president on Friday when he meets with all permanent secretaries and professional heads of institution at State House.

This is according to a leaked official communique issued by the Secretary at the Office of the President.