WHY IBORI CAN BE EXTRADITED TO LONDON 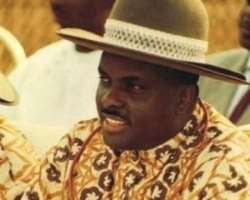 The arrest in Dubai and ongoing extradition process of James Onanefe Ibori, former governor of Delta state, marks the beginning of a significant milestone in the anti-corruption fight in Nigeria. Ibori is wanted for money laundering charges in the U.K. Until now Dubai has been a safe haven for corrupt politicians and billion of dollars has been laundered to the emirate.

This episode will also mark the jurisprudence of international extradition and its effect in the fight against corruption in Nigeria.

Extradition refers to the delivery of a person, who is suspected or has been convicted of a crime, by a country or other jurisdictions where the person has taken refuge to the country or jurisdiction that claims legal authority to prosecute the person.

Although the Nigerian Extradition Act of 1990 did not expressly define extradition, its intent is apparent from Section 1 which states that,"... the surrender by each country to the other of persons wanted for prosecution or punishment."

The United States Supreme Court in Terlinden v. Adams, 184 U.S. 270, 289 (1902), defined extradition as "the surrender by one nation to another of an individual accused or convicted of an offense outside of its own territory, and within the territorial jurisdiction of the other, which, being competent to try and to punish him, demands the surrender." An international extradition treaty obligates the host country to surrender to a requesting country a person charged with or convicted of an offense in that country.

Historically, extradition dates back as afar as the ancient middle- and far-eastern civilizations as a matter of courtesy and good will between sovereigns. The earliest recorded extradition treaty dates to 1280 B.C., between Ramses II, the Pharaoh of Egypt, and King Hattusli III of the Hittites, and allowed for the reciprocal return of criminals. The modern system of extradition unfolded in Europe from the 18th century onwards. With the increase of national states and the centrality of the concept of sovereignty, the development of bilateral treaties between nations has become the norm to regulate extradition. However, extradition between countries is not considered an obligation in the absence of a formal treaty.

The willingness of countries to accept limitations on their state sovereignty stems from four purposes which provide the theoretical foundation for international extradition: (1) to obtain reciprocal return of fugitive offenders; (2) to facilitate the punishment of wrongful conduct, and thereby promote justice; (3) to avoid harboring within their borders those who may commit offenses similar to those which they are accused of committing in another jurisdiction; and (4) to avoid international tensions caused by one country's refusal to return a particularly sought-after accused offender.

Extradition treaty involves serious crime and the existence of evidence for the prosecution of the accused individual or that the individual under extradition process has been convicted under conditions of due process of law. Also, extradition treaties depend on a principle of 'double-criminality' which provides that the offense for which extradition is requested is regulated by law in both countries.

Other common provisions include that the conditions of the treaty are reciprocal between the two parties, that the extradited person can expect or already had a fair trial in the requesting country, and that the punishment will be proportional to the crime. Most countries, including the United Kingdom, will not surrender a fugitive wanted for a political crime. The rise in terrorism, however, has brought about some limitations to the political offense exception.

The United Kingdom in 2006 pursuant to the 2003 Act entered into a bilateral agreement with the United Arab Emirate (UAE) concerning extradition. Ratified in 2008, the treaty allows extradition to be requested for any offence which attracts a maximum penalty of at least 12 months in both the UK and the UAE. The evidential requirements set out in the treaty mean that both the United Kingdom and the UAE must provide a prima facie evidential case against any person whom they wish to extradite. Extradition may be refused if (among other things) it would breach a person’s human rights. Jeleel Ahmed was the first person to be extradited from Dubai the UAE to Britain and was jailed for his part in the killing of a disabled man in London.The UK/UAE extradition treat became necessary when Dubai, the second largest emirate of the United Arab Emirates after Abu Dhabi, became a major hub for fraudulent activities. In 2005 there was a rise in fraud to third countries such as Dubai, after tougher measures in the European Union caused fraudsters to redirect their trading towards non-EU countries where they believed they could avoid regulation. It is reported that 90% of the money defrauded from the British government winds up being laundered through Dubai banks.

The arguments that James Ibori’s offense is political and hence not extraditable are both erroneous and mischievous. James Ibori is facing graft charges in Nigeria and has been declared wanted there. Also, he is presently facing money laundering charges in the United Kingdom. His Associates Christine Ibie-Ibori and Udoamaka Okoronkwo-Onuigbo were, among other crimes, convicted in London for conspiring with James Ibori to launder stolen money. These are not political offenses but criminal in nature and hence fall under the purview of international extradition laws. There is no case or statute law under the sun that states that a graft offense is political in nature. Money laundering is a criminal offense both in the United Kingdom and the United Arab Emirate. Suffice it to state that the James Ibori case falls in all fours with principle of international extradition law.