WINNING THE WAR AGAINST IGNORANCE IN NIGERIA 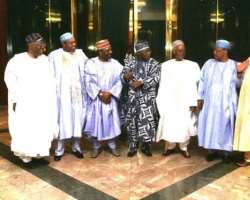 As a matter of preference I have tried to refrain from focusing on the many sided ills of decades of military and civilian misrule in Nigeria because I did not want to call attention to the bad or give undue credence to the inconsequential at the expense of urgently needed reforms. It worked well in the run up stages of the Nigerian revolution but then many begin to question if truly these ills have had an impact enough to warrant our going back to it now that reforms in Nigeria are set to take off. My answer is yes.

Without proper knowledge of the socio-political and economic implication of the legislation we make today we risk repeating a very painful history in the guise of reforms. There is to be no compromise in these reforms as unfortunately we appear to be doing now in the name of political expediency because then it assumes all the color of the old merry go round that brought Nigeria to her knees in the first place. Queries have been coming to me lately. Why do you continue to write about military rule when civilians took over power more than a decade ago? Why do you want to dampen the good efforts of this dispensation by complaining about everything? Why are you trying to overheat the polity? Why can’t you give them a chance? Why can’t you join hands with the leadership to move the nation forward? It has always been the same tune unchanging and the tactics is ever revolving. I have seen many before.

Governance in Nigeria has not changed a bit since 1966 despite the elections and selections. Always have appeared those who ‘overheat the polity’ because a blanket of ignorance covers the populace and it is consciously maintained by governments as a matter of duty to ward off any attempt to give more light on an issue. So whether or not a new government is in power does not change things, whether it is civil or military does not matter. The level of ignorance has so increased and rising still in society as a result of this limiting of knowledge to suit the pseudo- knowledge of those in power. Now a sociological problem has become prevalent in the Nigerian society. People are perplexed about the cause of simple things like death, diseases, and unemployment. Well, what else would make the churches thrive? For many Nigerians there is always a demon, a witch, an enemy or a Lucifer behind their afflictions and so much is invested in attaining a religious solution.

In the same way they believe a superman would emerge to wipe away all troubles. They prefer to install super people than install systems. Ignorance maintained by society has prevented people from looking at the problem directly and confronting it, they always have to find a scape -goat that is socially and politically acceptable. Nobody dares to blame policies of the government because they have for hindsight the impunity of military governments to compare. They believe that government will turn the fierce machinery of power on this unfortunate until he or she confesses his or her mistake to protect the system. And they are right here because no change has come in this too. That is why there is never an opposition to the ruling party because the culture is to support any government in power.

Nigerian governments do not accept remorse. They are and always have been right. Let me narrate to you a personal experience. In 1991 my stay here was nearly taken away because I gave the then Nigerian Military ‘President “a seven-day ultimatum to release NANS Student leaders confined in Prison for demanding an increase in their bursary allowance. I was the then National President of the pacifist apex student organization known as the Student Peace Movement based in University of Lagos. Our role was to keep peace on campuses by initiating dialogue. This time we could not arrange any dialogue with the student leaders in prison so we argued for a reprieve failing which in seven days we could not also anymore guarantee campus peace in Nigeria; especially where the students remained in prison after the expiration of the ultimatum. Through my roommate who turned out to be a police plant: the junta accused us of overheating the polity. I was given an ultimatum to withdraw the ultimatum publicly before the seven days or ….. I refused to do so and went underground.

A manhunt from hired assassins of government ensued throughout Lagos-Suru-lere-Mushin-Oshodi-and ended at iju. The assassins were condemned murderers released from prison for this assignment and they had the courtesy to call in once in a while to explain their mission. How they knew the phone number of my hideouts I was unable to determine. Finally after miraculous misses from live bullets, on the seventh day I heard that the Students leaders had been released. I was hospitalized briefly before returning back to campus and after my final exams, announced my leaving campus for the Presidential race. As soon as I declared my intent, my security was assured. I was even offered an orderly.

You may ask yourself if this impunity and insecurity has changed because of today’s impending reforms. The answer is no; the reason being that the underlying system, the structural deficiencies remains and security situation is still a nightmare for any one who insists on telling the truth. The Military had developed a way to avoid responsibility through orchestrated discontinuity.

The civilians have not changed in this respect. Perhaps they never had the capacity. Every new regime blames the outgoing one for present woes. They will rather change the names of unpopular programs, projects, policies but everything remains the same. You know about NEPA to Power Holding; NITEL to MTEL, Operation feed the Nation to Green Revolution to Back to Land; MAMSER to National Reorientation; etc. These names are changed to avoid the returning reciprocal action of bad planning from being noticed in order to maintain a good image for the new government. It is to "give them a chance" and we have been giving new governments’ chance to disappoint us.

This time around we are not going to allow anyone disappoint us and that is why we tried to get assurances from credible governments like America before giving “them a chance”. The idea is to raise the level of knowledge above this blanket of ignorance that perpetuates impunity. Now we are being accused of overheating the polity for insisting on the truth. Now it is the government in power that everyone is rooting for. Everyone now thinks the problem is solved by who runs for President especially if he is the incumbent. We have forgotten History so fast. We have also dropped restructuring. For me if speaking the truth will overheat the polity, I call on all Nigerians to do so without further delay. We must liberate our people who are so helpless that they now populate all kind of churches sometimes duped for their ignorance. Everyday our people are duped on the road by so called security personnel whose work is only to slow down peoples movements and rob or kidnap.

People are so helpless that they do all sorts of things. They turn their frustrations on each other. Can you imagine a man referring to his mother as a witch responsible for his misfortune of joblessness, disease and unsettled marriage? The said man confessed on television of having beaten up his mother in the bid to extract confession in a church. Today gifted children are ostracized as witches by their parents and sometimes killed by the mob.

Ritual practices have all but received legal backing amongst political organs. While extreme poverty reigns supreme the people are being turned against themselves as they look for whom to blame. Kidnappers have gone hare wire looking for who can pay a ransom among the rich. No one appears really safe from our social malaise. Nigerians cannot blame the government because there is really no government in the classical sense of the word, no continuity and juntas or political cults do not allow or take kindly to scholarship.

In Nigeria, the polity is everything for the incumbent for there is no life outside power here. The system is so corrupt and brutal in its quest for its own end that you have to step on people’s toes and you need so much security to prevent them from extracting a mortal revenge when you leave office. So everyone is aware of that. That is why everyone that gets into power becomes the favorite to be reelected or win again. In any case he will be sitting on his own judgment at the crucial time.

This is also why it is difficult to extract changes here because some changes will make an incumbent lose out. Every incumbent is already a prisoner of the system’s interest to perpetuate it self.

It is time we properly focused on the sociological impact of both military and civil misrule of Nigeria so as to be properly advised that "enough is enough." It does not end in placards. We need studies carried in this area at home and abroad to properly tackle these effects.

The reason here being that these effects are capable of scuttling all positive efforts made so far. For instance if Nigerians fail to turn out to vote, then the old system wins. If Nigerians fail to demand for their rights or recognize them when given then we may be back to square one. To do that we need to lift the blanket of ignorance woven by governments by passing the Freedom of Information bill into law as it is. We need to rehabilitate our people spiritually and physically by getting them to understand that their neighbor is not to blame. We can further this change by getting government to begin to accept blame for its predecessors mistakes. Let us allow research and enquiry by improving education so that the young and old can understand that people die not because of witches or enemies but could have been for lack adequate nutritional protein caused by existing bans on importation of essential food items occasioned by quota manipulation of governance. Nigerians need to know that they can help themselves now rather than later by insisting on the unconditional restructuring of the political system that perpetuates ignorance and poverty.