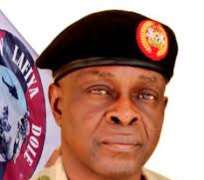 The committee which is headed by Brigadier General Henry Tafida Wesley has three days to submit its report for further necessary action by the authority of the theater command and control center of operation lafiya dole.

Inaugurating the committee at the theater command headquarters Maiduguri, Major General Nicholas said ," at about 8 pm on Sunday last week, there was an attack on the Nigerian troops by the boko Haram insurgents in an attempt to penetrate Maiduguri metropolis through the cashew plantation area with 10 suicide bombers.

" The suicide bombers ended up killing 18 innocent civilians in the villages and regrettably, a soldier who was trying to go and pick his phone that he gave out for charging met his death in the course of picking his hand set.

"It is confirmed that 18 people died from the suicide bomb explosions and a soldier while 75 others were injured", Rogers said.

He urged the people to be very watchful and careful, saying," henceforth, whenever there is any thing happening, people should remain indoors instead of rushing to the scene of incident like this."

He also appealed to the various communities to help the military with useful information for prompt respond while assuring that, the military will do its best to ensure that peace is restored in the state and north east.

General Nicholas added that people should be able to pass useful information on time, noting that, delay in relating information makes the military's work difficult and puts the military in danger or risk. The issue of crowding or people rushing to scenes of attack should be stopped henceforth to avoid casualties from the civilians.

Responding, the Leader of the 4- Man Committee of Inquiry, Brigadier General Henry Wesley said the committee will strictly follow the terms of reference of the committee with a view to ascertain the reasons or causes as well as determine what exactly happened by way of asking both the soldiers , other security agents there including the CJTF and host communities questions on what really happened, how it happened and other relevant questions that will be useful to the committee's assignment.

He also assured that the committee will submit its final report as at when due while urging the people and soldiers to cooperate with the committee members achieve its assignment in the interest of all and sundry.