Apprentice in connivance with friend killed boss, wife in Ogun 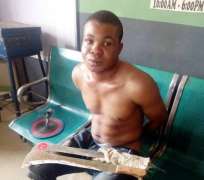 An apprentice, Okwudili Okoro and his friend, one Kenneth have killed his boss, Mr Azuibike and the wife of his boss, Jacinta at Ijako in Ogun State for not giving him money after three years of apprenticeship.

The PPRO added that the detectives are on the trail of Kenneth who escaped arrest and is being hunted for by the police over the death of the couple.

According to the PPRO, "on interrogation, the suspect who hails for Ebonyi state claimed that he has served his deceased boss for three years and that when it was time for him to be settled, his boss refused to give him money.

The remains of the couple were taken to the mortuary of the General Hospital, Otta for autopsy to further aid police investigation..

The Commissioner of Police in the state, Ahmed Iliyasu ordered the immediate transfer of the suspect to homicide section of the State Criminal Investigation and Intelligence Department for investigation.