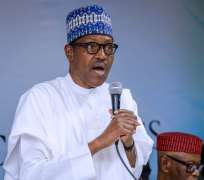 It was after a tense weekend, every Nigerian and partly the world held her breath...Nigerians watched with berthed breath...there were an array of countless actors, stars, and villains, and after all said and done, the General Elections of 2015 in Nigeria delivered it all.

Below is the first Official statement by then President-elect, Muhammadu Buhari after the announcement of the results of presidential election.

At exactly 5:15pm this evening President Jonathan called to congratulate me on my victory. For this I want all Nigerians to join me in congratulating and appreciating Mr. President for his statesmanship.

President Jonathan engaged in a spirited campaign and was a worthy opponent. I extend my hand of fellowship to him. I look forward to meeting him soon as we plan the transition from one administration to another. He will receive nothing but understanding, cooperation and respect from my team and me.

The good people of Nigeria answered the call of history. When the account of this fine moment is written, it will be said that it was the people themselves who led this nation to democracy.

You stood in line patiently for hours in the sun, rain and then in the dark to cast your ballots. Even when the vote was extended to Sunday in some places, you still performed your civic duty. You did so peacefully. You voted with your heart. Your vote affirms that you believe Nigeria’s future can be better than what it is today.

You voted for change and now change has come.

INEC has released the official results of the Presidential election. INEC has declared that I gained the most votes with the required spread and thus won this election. In a more profound way, it is you, Nigerians that have won. The people have shown their love for our nation and their belief in democracy.

The declaration of INEC accurately reflects the will of the people. While there might have been some logistical obstacles and irregularities associated with the exercise, the result shall stand as what the people want.

I thank all Nigerians who have made this day possible. Our country has now joined the community of nations that have used the ballot box to peacefully change an incumbent President in a free and fair election. To me this is indeed historic.

Most people will welcome the result because it is the one they voted for. Others will naturally be disappointed. I ask that we all be circumspect, respectful and peaceful in these times.

This was a hard- fought contest. Emotions are high. We must not allow them to get the better of us. This is not the time for confrontation. This is a moment that we must begin to heal the wounds and work toward a better future. We do this first by extending a hand of friendship and conciliation across the political divide. We hope and pray our friends in other parties reciprocate.

I thank all the members of the All Progressives Congress, APC, for their commitment and their hard work through the formation of the party, the campaigns and the Presidential elections. Let me equally extend my appreciation to the MEDIA, Civil Society and the Security agencies for their selfless service.

The International press and our friends abroad deserve special commendation for their support throughout the process. We promise a robust and dynamic engagement with your countries in matters of mutual interest to nations.

In the interim, I call on all Nigerians to be law abiding and peaceful. The eyes of the world were focused on us to see if we could vote in a peaceful way and carry out a representative election in an orderly manner. You have proven to the world that we are a people who have embraced democracy and a people who seek of government by, for and of the people.

We have put one party state behind us. You have voted for a party and president that will serve and govern but never rule over you. Change has come. A new day and a new Nigeria are upon us. The victory is yours and the glory is that of our nation – Nigeria

One Sunday morning, a wealthy man sat in his balcony enjoying sunshine and his coffee when a little ant caught his eye; going from one side to the other side of the balcony carrying a big leaf several times more than its size.

The man watched it for more than an hour. He saw that the ant faced many impediments during its journey, paused, took a diversion and then continued towards destination.

At one point the tiny creature came across a crack in the floor. It paused for a little while, analyzed and then laid the huge leaf over the crack, walked over the leaf, picked the leaf on the other side then continued its journey.

The man was captivated by the cleverness of the ant, one of God’s tiniest creatures.

The incident left the man in awe and forced him to contemplate over the miracle of Creation. It showed the greatness of the Creator.

In front of his eyes there was this tiny creature of God, lacking in size yet equipped with a brain to analyze, contemplate, reason, explore, discover and overcome.

Along with all these capabilities, the man also noticed that this tiny creature shared some human shortcomings.

The man saw about an hour later the creature had reached its destination – a tiny hole in the floor, which was entrance to its underground dwelling.

At this point the ant’s shortcoming that it shared with man was revealed.

How could the ant carry the large leaf it carefully managed to its destination into the tiny hole? It simply couldn’t!

So the tiny creature, after all the painstaking and hard work and exercising great skills, overcoming all the difficulties along the way, just left behind the large leaf and went home empty-handed.

The ant had not thought about the end before it began its challenging journey and in the end the large leaf was nothing more than a burden to it. The creature had no option, but to leave it behind to reach its destination.

The man learned a great lesson that day. Isn’t that the truth about our lives?

For me and I hope a sizable number of Nigerians, I remain a cautious optimistic on the Nigerian project if there is any, I have dreams, but not necessarily a Nigerian Dream, because I do not know of any in it’s real beneficial term.

So, with all the pain, many believed that there was hope, with all its inherent failure, the card reader, and the advent of the PVC, all the shortcomings and successes. We navigated those elections in 2015.

However we remain far away from really winning as good governance has remained a mirage, all the hype and excitement has not rewarded citizenry with a responsive government and leaders that feel the pulse of the governed.

We are really no different from the ant, having done the great, by change we stuck at the same place—APC won, but has it done things differently from the ANT, and PDP has it provided credible opposition pushing APC to its limits for the people’s advantage, and all the naysayers, letter writers, counsels, and self defense experts, are we not behaving like the ANT and hoping the APC and Mr. Buhari fizzle out.

The winner of the 2015 General Elections should really have been the Nigerian people and nation; sadly we have behaved like the ANT…

Not only behaved like the ANT but also have not harnessed the positives of that poll, our tribe and tongue continue to tear us apart, there is currently no nation for us to proudly serve, and the much desired peace continues to elude us…if we have made a better choice—only time will tell.