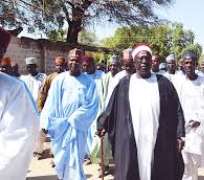 Shettima gave the order at the weekend while addressing the Brigade Commander of 21 Armoured Brigade, Col. AG Nuhu, during his two day inspection visit to Bama town.

It will be recalled that Bama town was severally attacked by Boko Haram insurgents between 2013 and 2015, displacing hundreds of residents that have been taking refuge at IDPs camps and host communities of Maiduguri metropolis.

The governor said the displaced persons would return in 10 batches, commencing from tomorrow with the ward and village heads.

He explained that 11,646 houses, schools, boreholes and a General Hospital have been completed by the Ministry of Reconstruction, Rehabilitation and Resettlement (RRR) and Victims Support Fund (VSF), noting that the step was to ensure a hitch-free return of 120,000 IDPs to their rebuilt community destroyed by boko haram insurgents in 2014.