SAYS, I AM NOT FIGHTING MY BOSS
By Kenneth Nwoke, The Nigerian Voice, Owerri 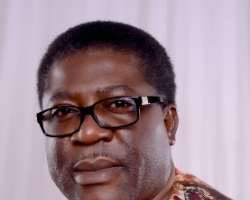 Contrary to the belief that the Deputy Governor of Imo State, Prince Eze Madumere’s ambition is necessitated by what people considered betrayal from his boss, Owelle Rochas Okorocha, the Deputy Governor has revealed that his ambition is occasioned by his vision, which he said will take the State to greater height especially in the area of strengthening the economy of the State.

The Deputy Governor made the clarification recently while addressing Imo leaders in a function in Isiala Mbano local government area of Imo State.

It will be recalled that Governor Rochas Okorocha in his bid to foist his son-in-law on Imo people for reasons best known to him, had asked his Deputy to contest for the Senatorial slot of Owerri zone, but was rejected by Prince Madumere who rather insisted on Governorship position.

Prince Madumere insisted he is the most qualified to succeed Governor Okorocha, adding that his wealth of experience, exposure and achievements are there for people to see.

He used the opportunity to explain to his audience that contrary to the insinuations in some quarters, he is not fighting his boss whatever may have been the case but in pursuance of realizing his vision to improve the living standards of the people through a researched based micro economic blueprint to ensure wealth creation at all layers of Imo populace.

“What drives my ambition to occupy the position of the governor of Imo State, come 2019, is my vision to raise the living standards of our people with well researched people oriented economic blueprint with a view to creating wealth adopting an approach that will make it trickle down to even the lowest cadre of our populace. I know that youths occupy about 66% of the Nigerian population, which deductively trickles down to our State. I believe in human capital development and I believe in empowerment that is sustainable through small, medium scale enterprise.

The difference this time is that we must anchor it on areas of comparative advantage. Make no mistake to believe that I am in the race for personal vendetta. God forbid. I bear no grudges. At least you all know that I have served meritoriously and that by my training I am a seasoned Administrator with exposure like no other. I have operated at the higher echelon in the private sector starting from corporate America to Nigerian private sector and then to the public sector. And by the special grace of God, I have excelled in every responsibility I have ever been assigned to handle together with the ones I took up myself”; he submitted.

Meanwhile, since Prince Madumere made known his intention to vie for the plum job in Douglas House, he has been receiving floods of supports from groups, leaders and other individuals, describing him as competent with requisite capacity and temperament to lead the people.