Horror! Lesbian couple drive themselves and all 6 of their Kids off cliff after neighbors suspected abuse 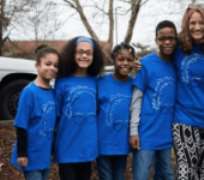 Their car was spotted at the bottom of a cliff on Monday. Jennifer and Sarah Hart, along with Markis, 19, Jeremiah, 14, and Abigail, 14, were all found dead. Hannah, 16, Devonte and Sierra, 12, ahve not been found.

Police said it’s not yet clear if they drove the car over the cliff intentionally or by accident. No brake marks were found at the scene.

A lesbian couple who plunged 100 feet off a coastal cliff died along with at least three of their six children.

Authorities say that Jennifer and Sarah Hart, both 39, were reported to Child Protective Services just days before they died. A neighbor called it in after their son, Devonte, came to their home asking for food every day for a week.

Bruce and Dana DeKalb said that the 15-year-old asked them to leave food out in a box and that his mothers were “punishing” him by not feeding him.

The neighbor also claimed that another one of Jennifer and Sarah’s children came to their home at 1:30 a.m. in 2017 asking for their “protection.”

On Friday, a CPS worker went the Hart family’s home and knocked, but no one ever answered. Instead, they packed up the car with their six kids and fled.

“I can tell you it was a very confusing scene because there were no skid marks, there were no brake marks, there was no indication of why this vehicle traversed approximately over 75ft of a dirt pull out and went into the Pacific ocean,” Mendocino County Sheriff Tom Allman said on Wednesday. “If this was an intentional act, I truly believe we are going to come to that conclusion.”

This week it was also revealed that Sarah Hart pleaded guilty to domestic assault charges in 2011. Her plea deal led to the dismissal of a malicious punishiment of a child charge.

Facebook
Police are asking anyone with information about the family to come forward. Especially those who say them in the days before the crash.

The three children who have not been found are still considered missing people, and the best case scenario is that they were not in the vehicle at the time of the crash.

Emily Blackwood is an editor at YourTango who covers pop culture, true crime, dating, relationships and everything in between. Every Wednesday at 7:20 p.m. you can ask her any and all questions about self-love, dating, and relationships LIVE on YourTango's Facebook page. You can follow her on Instagram (@blackw00d) and Twitter (@emztweetz).