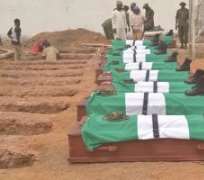 Eleven soldiers killed on March 20, 2018, along Birnin Gwari – Funtua road while on operation Ayem Akpatuma, which was established to disarm armed militia and suspected killer herdsmen, have been laid to rest amid tears.

The security organisation also released the names of the deceases and the photographs of the colourful burial ceremony in a short message honouring the late soldiers. “Today, Thursday, 29th March 2018, will forever remain indelible in the minds of all patriotic and peace-loving Nigerians, officers and soldiers of the Nigerian Army and the families of 11 solders of the Nigerian Army who lost their lives during Exercise AYEM AKPATUMA along Birnin Gwari – Funtua road on 20th March 2018.

The caskets bearing the remains of the late soldiers.  “It was the day that the remains of gallant heroes were laid to rest at the Commonwealth Cemetery Kaduna, amidst tears and befitting military burial. May their souls rest In peace, amen,” the statement said.

The spokesperson for the Nigerian Army, Brig Gen Texas Chukwu, on Thursday, March 29, urged the insurgents to take advantage of the federal government’s amnesty offer which was still open, Sahara Reporters stated. Should Nigerians pick up arms to defend themselves against herdsmen?(Street Interview/Naij.com)