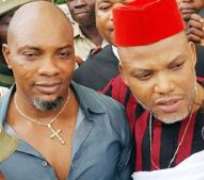 The Federal High Court, Abuja, on Wednesday, adjourned until June 26 to enable Sen. Enyinaya Abaribe (PDP, Abia) and two others to produce leader of the proscribed Indigenous People of Biafra (IPOB) Nnamdi Kanu in court.

Abaribe, Immanuel El-Shalom, a Jewish Chief High Priest, and Tochukwu Uchendu, a Chartered Accountant, who stood surety for Kanu are to produce him in court or risk jail.

The trial judge, Justice Binta Nyako, fixed the date after the court had ordered the prosecution to serve the sureties with an earlier order of court.

The order demanded the sureties to appear in court and explain the whereabouts of Kanu or show cause why they should not forfeit their N100 million bail bond.

At the resumed hearing, counsel to the sureties observed that the court order had not been served to his clients to enable them to prepare their defence.

Mr Chukwuma Umeh (SAN), counsel to Abaribe whose submissions were adopted by the others urged the court to direct that an enroll order be issued and served on his client by the prosecution.

He said this was in the spirit of fair hearing as enshrined in Section 36 of the 1999 Constitution.

He added that “I apply that the proper thing be done, that is for a summon to be issued and served on the sureties for them to show cause why their bail bond should not be forfeited.

“ The prosecution ought to have taken further steps to obtain an enroll order and serve on them.

“This is because a court order that is not served cannot be used against the sureties as it is not binding on them until it is served.”

The prosecuting counsel, Mr Shuaibu Labaran, prayed the court to discountenance the submissions and proceed with the business of the day.

He said the business of the day was for the sureties to show cause why they should not forfeit their bail bond.

In a brief ruling however, Justice Nyako ordered that the sureties be served with an enroll order of the court to show cause why their bail bonds should not be forfeited.

Part of the ruling was that in the alternative, the sureties should produce Kanu in court or go to prison.

The prosecution had in an application asked the court to order the three sureties to produce Kanu following his failure to appear in court after he was granted bail.

Kanu is facing a four-count amended charge preferred against him and four others, whose trial had since been separated from his.

Justice Nyako had in a ruling on April 25, 2017, admitted Kanu to bail after he spent over one year in detention.

Abaribe and the two others entered an undertaken to produce Kanu before the court to face his trial by standing as sureties for him.

Kanu had since then not attended the trial and his counsel, Mr Ifeanyi Ejiofor, insisted that

the whereabouts of the proscribed IPOB leader remained unknown after the military attacked his home town in Abia in 2017. (NAN)