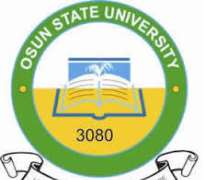 The Governing Council of the Osun State University, Osogbo has approved the payment of three hundred million naira (N300M) balance of the 2014/2015 Earned Allowance to the staff of the university and urged the non-teaching staff who are on strike to call off their on-going strike.

The Registrar and Secretary to the Governing Council, Alhaji Gafar Shittu disclosed this while briefing journalists on the outcome of the emergency council meeting.

He explained that the council called on all non-teaching staff to resume back to work on or before the 10th April, 2018 and that the "no-work-no pay” extant rule of the University would be applied to any worker that failed to resume to work.

It would be recalled that the UNIOSUN Non Teaching Staff Unions (NASU, NAAT and SSANU) under the aegis of the Joint Action Committee (JAC) had on Monday, 05, March, 2018 declared an indefinite strike action despite the March/April, September, November and December 2017 up till January of 2018 strike actions.

The Registrar said the council yielded the demand of the workers despite its financial constraints and that the three hundred million naira (N300M) balance would be paid instalmentally at ten million naira (N10M) per month effective from 30th April, 2018.

The Registrar said the council resolved that a register of attendance be administered in every College and departments for non-teaching staff members who are willing to resume work immediately and that the “no-work-no pay” extant rule remains in force.

According to him "It is on this note that the management reiterates its long-standing appeal to the striking non-teaching staff to return to work and join once again in the arduous task of the growth and development of the University."

While the main demand in the previous strike remains the immediate payment of earned allowances, the unions have introduced new demands which include withdrawal of the new Conditions of Service for lack of Union’s inputs and the reinstatement of staff members allegedly removed from payroll.

The Registrar said "when the Council of the University on Monday, February 5, 2018, set up a committee to meet and negotiate with the Unions, it announced that the extant rule of 'no-work-no pay' would be invoked against any staff that failed to report to work immediately."

Gafar said the council expressed worry that the Unions ensured that the entire University system was brought into comatose and staff members who are willing to resume for work were issued threats to their lives and properties.

"It is apposite to state at this juncture, that the University has been unable to pay the Earned Allowance because of the shortfall in its finances. Nevertheless, of the total sum of five hundred and twenty four million naira (N524M) being the cost of the accrued allowances for the 2013/2014 and 2014/2015, the sum of two hundred and twenty four million naira (N224M) had since been paid while the university is not owing any arrears of salary till date."

"It should be noted that even Federal Universities have only paid for 2009/2010 while no state university in Nigeria has paid anything close to UNIOSUN".

"The non-teaching staff members have been on strike for three (3) weeks. The implication is that the University has been practically shut down. Several statutory meetings had to be cancelled or postponed while the National Universities Commission (NUC)’s accreditation of regular undergraduate programmes and the Nursing Council of Nigeria’s Professional accreditation of the nursing programme were almost stalled."

The Registrar noted that the non-teaching staff members who are still on strike were paid salaries. He said the council was not happy that the students who are financing the University were being short-changed and losing out.

In his reaction, the university's NASU Chairman, Mr Isaiah Fayemi said the Joint Action Committee (JAC) of the institution would meet to decide the next line of action.

He said "We are presently in the State House of Assembly on the matter. The JAC will meet to take a definite position decision of the University's governing council".