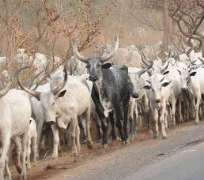 The spiraling destruction of both lives and livelihoods orchestrated by nomadic Fulani herdsmen on rampage in Nigeria is viewed by many as the greatest security threat coming only after Boko Haram. In fact recent surveys have shown that more people have died in clashes with herdsmen than in Boko Haram attack.

Though the country is not at any conventional war but the plethora of scenes of bloodletting due to sundry clashes across the country is indeed quite disturbing. Yet everyone carries on as if there is no cause for alarm. The country is currently sitting on the keg of gun powder as everyone is apportioning the blames instead of dealing with the challenges. Rather than prioritizing the security of its citizens, unfortunately leaders are busy politicizing or trivializing this menace. But Global Terrorism Index on its report published by the Institute for Economics and Peace had ranked Fulanis’ herdsmen as the fourth deadliest terrorist group in the world.

What is rather surprising is the fact that government has been treating this terror group with kid gloves, otherwise why are they allowed to be in possession of fire arms as sophisticated as AK45 riffles? They do not operate clandestinely; in fact a sight of cattle grazing announces their presence and yet their nefarious activities are allowed to escalate to this magnitude.

Fulani herdsmen migrated to the country from Senegal and Gambian area of West Africa between thirteenth and fourteenth century but by the dawn of 19th century following the Jihad by Usman dan Fodio, they had fully adapted to Hausa culture. They had since then driven their cattle across the Niger. The development which has led to constant clashes with farmers as their animals often times feed on farm crops thereby destroying farmlands. This is what usually leads to constant herdsmen versus farmers clashes.

What is worrisome is the number of casualties resulting from those fatal clashes. In most cases a whole community is sacked while houses are burnt. Benue, Taraba and indeed the entire Middle Belt area of the country has recently witnessed unprecedented gory sights arising from activities of these rampaging blood thirsty marauders who neither have respect for the laws of the land nor the sanctity of human lives.

But what is rather astonishing is the fact that they are still allowed to move freely after the mayhem they unleash on defenseless and hapless citizens. Where is the intelligence gathering apparatus of the security forces? There are also reports that even after alerts of impending attacks have been sent to security operatives, nothing is done in most cases to prevent such deadly invasions.

These killer herdsmen are the real threat to both life and food security in this country. A situation where unsuspecting farmers are murdered in cold blood while working in their farms would no doubt create serious panic that may scare others away from their farms for a long time. Also some of these farmers are already internally displaced and are afraid to return home; thus creating an ugly situation that threatens food security and supply in the country.

The many mass burials conducted for victims of herdsman attack in the Middle Belt makes many to wonder if there is indeed a government that truly cares about the lives of its citizens. Sadly, we have become a country where life of a common man has no value. How much is truly the worth of human life in this country? How does one feel when innocent citizens who freely handed their destiny into the hands of this government by voting it to power are allowed to be slaughtered this way? How can one juxtapose this development with the primary purpose of government which is the security of lives and property of its citizen? Note that we are not talking about faceless people like Boko Haram, we mean a group whose actions are most times defended by a registered association in this country called Myetti Allah Cattle Breeders Association of Nigeria.

Fulanis should be told in no ambiguous language that the era of Jihad which led to the expansion of their territory and influence in the 19th century had long been over. This inordinate quest to acquire more grazing land for their cattle cannot justify the shedding of innocent blood. Such primitive approach of conquest through mass destruction of lives and property cannot be allowed especially when the country is not at war. They have this long history of acquisition of land through conquest but to contemplate such a feat now shows that they live in 21st century with 19th century mentality.

This is why the Gen. T Y Danjuma’s assertion of alleged ethnic cleansing cannot be swept under the carpet. Though this writer has a different opinion about what constitutes ethnic cleansing but such alarm being raised by a retired General and a former Defence chief should be investigated especially the allegation of collusion of security operatives with the assailants. Are these carnages involving farmers and pastoralists a case of ethnic cleansing? I think we should be a little cautious here. Which ethnic group is marked for cleansing and by who? This unfortunate situation the country finds itself can be exploited for any purpose including creating anarchy.

Let us see clear instances which many agreed were cases of ethnic cleansing and then draw an analogy with the situation in the country today. In Rwanda in 1994, the Hutu ethnic group which was backed by the government in power set out to exterminate the minority Tutsi population while the Yugoslavia’s collapse in 1991 culminated in Serbs targeting Bosnnian and Croatian civilians for cleansing.

The herdsmen and farmers clashes in Nigeria are struggles for survival arising from the effects of global warming with increasing disappearance of vegetation in the North which has caused them to continue to move downward the Middle Belt in search for pasture. They are desperate for grasses for their cattle and would not care who owns the land as they have clashed with their fellow Fulani farmers before. But the solution to these clashes is building of ranches for the cattle. Also, Lake Chad Basin should be revamped to boost life again in that region. But the good news is that Nigeria can surmount its problems if citizens collectively rise above their religious and socio-political differences as majority of good people can always defeat the minority bad ones.