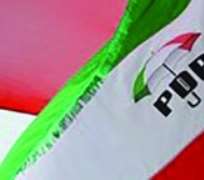 The People's Democratic Party (PDP) in Kano state has threatened to take legal action against the state government for allegedly using the police to stop its planned rally in Gaya on Saturday, March 24.

The state party chairman, Alhaji Mas'ud El-Jibril Doguwa made the stand of the party known while addressing newsmen in Kano on Friday.

He said during the rally, the party planned to receive the gubernatorial candidate of Democratic Oeople Movement (PDM), Engr Bashir Ishaq and his supporters into the PDP.

He said as a matter of official courtesy and to ensure adequate security coverage, the party wrote to inform all relevant security agencies including the Nigeria Police and the DSS weeks ago.

He explained that all the security agencies assured the party of their cooperation which gave them the courage to go ahead with their preparations.

“The police only yesterday (Thursday) communicated to us another decision adivising that we shelve our planned rally over what they maliciously called “security challenges”.

He alleged that it was the state government that planned and decided to give the party what he described as 'Kwankwassiyya treatment'.

He said the 1999 constitution as amended in sections 40 and 41 (1) and (2) A has guaranteed every Nigerian freedom of assembly and association with other persons including belonging to any political party.

He said the constitution did not require the party to ask for permission pointing out that the party had done the needful.

“It is only fair if a registered political party is allowed to exercise its constitutionally guaranteed fundamental human rights to assemble in Gaya tomorrow, “he said. (NAN)