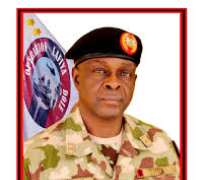 The Nigerian Army on Wednesday began a comprehensive rotation exercise of 3,000 troops engaged in ongoing campaign against Boko Haram terrorists in the North-East.

The Theatre Commander of Operation Lafiya Dole, Rogers Nicholas, made the disclosure while addressing the rotated troops in Maiduguri.

He explained that the exercise was approved by the Army Headquarters to serve as a morale booster and enhance troops’ operation.

Nicholas said, “The Chief of Army Staff has graciously considered that and gave us men to do rotation; this is the first batch of soldiers that are being rotated. About 1,500 of them will be leaving today and in the next few days another 1,000 or plus will also leave, we are rotating about 3,000 soldiers from OPERATION LAFIYA DOLE.

“It is going to be an ongoing exercise as the operation continues we will exercise rotation to make sure that most of our troops that stayed long would be re-joining their units and families”.

The Theatre Commander went on to reveal that the military authorities had adopted effective modalities to ensure the payment of outstanding allowances to the troops.

While commending the troops for their sacrifice and gallantry, he called on them to use the period and stay with their families.

In their remarks, Warrant Officer, Francis Adama and Adederan Akanbi, a sergeant lauded the gesture, adding it would avail the soldiers an opportunity to rejoin their families after four years of duty tour.

Adama expressed delight over the safe completion of his mission in North-East and enjoined troops to be committed to ensure a total end of the Boko Haram insurgency.