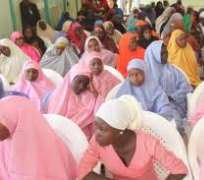 The Muslim Students’ Society of Nigeria has expressed delight over the release of schoolgirls earlier abducted at a school in Dapchi, Yobe State, describing it as the biggest relief of the moment.

The students’ body in a press statement by the president of MSSN in Lagos State, Dr. Saheed Ashafa, congratulated the parents of the released girls and sympathised with those whose daughters yet to be released.

The Federal Government has announced the release of the girls abducted by the insurgents at Government Science and Technical School, Dapchi on February 19.

The insurgents transported the girls back to Dapchi in the early hours of Wednesday.

While expressing optimism that the remaining girls would be released, Ashafa urged that adequate security measures should be put in place to prevent a similar occurrence.

He appealed that security should be tightened in all schools across the country, adding that attention should be paid to the medical and mental state of the released girls.

He said, “We hail the return of the Dapchi Schoolgirls and rejoice with their parents for the biggest relief of the moment. We appeal that Nigerian girls should never again be abducted from their schools. This is because when incidences like this happen, government and organisations’ efforts to get more children in school is defeated.

“It sends a negative signal about education and parents/guardians will be scared that schools are insecure places for girls. The provision of a safe environment for education is very crucial and germane to the nation’s progress.”

Ashafa, who condemned perpetrators of the abduction, demanded that more resources should be deployed to the security of schools.

“Situations, whereby students are exposed to various degrees of security threats, are unacceptable. Government at all levels must deploy quality resources to address the issue of security pitfalls in schools and our country as a whole,” he added.