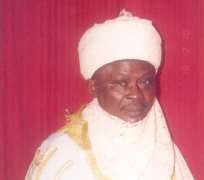 History will be made on the 7th of April, 2018, when Mr. Alphonsus A. Mamman, the Director of Inspectorate in the office of the Adamawa State Accountant-General will be turbaned by the District Head of Yebi, Alhaji Hammanjoda Abubakar Gambode, as the first Santuraki of Yebi.

The title will be bestowed on Mr. Alphonsus A. Mamman, because of his sterling qualities and close affinity with the people of Yebi and his immense contributions to the community over the years, though he is from Mubi-North.

The District Head will confer the title on Mr. Alphonsus A. Mamman because of his perception of Yebi as his second home and his deep close relationship with the community, which is cordial and built on mutual understanding.

The new Santuraki of Yebi had a very long relationship with the people of the community as he always shared their moment of grief and sorrow as well as share in their moment of joy. These attributes endeared him to the people especially the traditional institution of the town and this is was why this prestigious title will be bestowed on him.

Mr. Alphonsus A. Mamman, has remained resolute and committed to the cause of the community. He is an enigma, but believes in the efficacy of loyalty and devotion to duty as well as paying back to the society.

In fact, it is based on this fact, that the District Head in his magnanimity made it possible for Mr. Alphonsus A. Mamman to be conferred with the title of Santuraki of Yebi.

The title is bestowed on a warrior to the community in time of war and the most respected one in the history of Yebi, which is in Ganye chiefdom in Adamawa State.

He is an embodiment of unity among the divergent tribes and that is one of the reasons the District Head of Yebi bestowed the title on him to foster more unity among the various ethnic tribes in Adamawa State.

He has a strong moral compass, an unrelenting dedication of providing succor to the people and a complete and modest personality, he is an example to all irrespective of tribe or religion.

He can trade success, but the real issue is the fact, that he does not play to the gallery on whatever he is doing. That is why in his place of work he is being described as the "Engine Room".

Mr. Alphonsus A Mamman would no doubt bring his wealth of experience and connection to bear on the Yebi community as Santuraki of Yebi, which will be bestowed on him with the tacit support of the Gangwari of Ganye.

He has a very robust cordial relationship with the scion of the community. The new Santuraki of Yebi, is a person, who is against social injustice, oppression and exploitation in whatever ramification.

He is always willing to contribute his own part for the development of Yebi community. That is why the District Head conferred on him the title so that he can have a complete sense of belonging as a son of the Yebi, which will ginger him to do more for the people of the Yebi.

The District Head has done the right thing by turbaning Mr. Alphonsus A. Mamman, as the new Santuraki of Yebi as this would in no doubt spur others especially the ones that hails from the community to strive to contribute meaningfully to the development of the community.

The excitement generated in the community because of the conferment is unprecedented in the history of the town. The level of appreciation of this laudable event ever done by the District of Head is immeasurable.

Other chiefdoms should borrow a leaf from what the District Head of Yebi by forging a common understanding among the ethnic nationalities that abound in the state as a whole with conferment of various titles.

Some communities across the state and the nation at large need to copy what will take place in Yebi, pioneered by the District Head on this illustrious son of Adamawa State. It is a good omen for the sustenance of harmony among the people of the different tribes.

Ahmed Gangs, commends the District Head for his foresight in Considering Mr. Alphonsus A. Mamman as the new Santuraki of Yebi. He merits the title because of his simplicity and easy-going attributes which has gone a long way in adopting him by all and sundry.