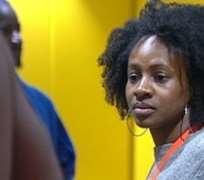 Anto, BBNaija “Double Wahala” housemate, has been evicted from the show.

She becomes the eleventh housemate to be evicted from the reality television show.

In the live show on Sunday, hosted by Ebuka Obi-Uchendu, Anto was asked to leave the house after receiving the lowest votes.

A total of 8 housemates were up for possible eviction this week.

The housemates were Anto, Teddy A, Alex, Lolu, Cee-C, Tobi, Miracle and Bambam.

Anto gathered the lowest number of votes for the week which led to her eviction from the house. During the live eviction show, Big Brother housemate, Tobi was close to being disqualified from the house after misbehaving but was issued a strike instead.

Previously, fellow housemates Leo and Ifu Ennada (Lifu), Bitto and Princess (Pritto), Deeone and Vandora (Vandee), Angel and Ahneeka(Gelah) were evicted from the show alongside Khloe and K-Brule (Ksquared) who were disqualified.

Speaking to Ebuka after her eviction, Anto says her purpose in coming to the Big Brother Naija House was to win the prize. She says that the first person she set eyes on in the House was Tobi but now they are friends and he needs to grow up.

In the eviction show, Nigerian singer, Simi, hit the stage to perform her hit single Owanbe.

Meanwhile, in what has never been done before, Big Brother organisers gave viewers the opportunity to bring back two of the 11 evicted housemates to play for the N45 million.