Shettima Set Up High Powdered Committee To Conduct Thorough Search on Activities of NGOs in Borno... 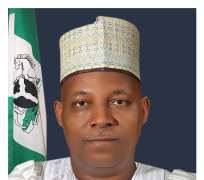 Governor Kashim Shettima of Borno state has constituted a high powered committee to conduct a thorough and meticulous exercises or search on the activities of Non Governmental Organizations (NGOs) with specific references to their areas of operations, sources of funding, profile of their staff and whether or not , they are duly registered by the relevant federal authorities.

In addition, he said the committee would also determine the relevance and quality of the NGOs vis a vis the needs and requirements of those they serve, especially, the IDPs.

The governor who stated this Thursday in his welcome speech at the Meeting of the State Security Council at the Government House Council Chamber further said that the committee would look into their modus operandi with a view to finding out whether they are in the state to exploit the security situation and derive benefits from the misery of our people or they are genuinely interested in alleviating the sufferings of the people.

Shettima also described as unfortunate and condemnable the recent unfortunate sudden attack or incident on soldiers and some humanitarian workers in Rann, Kala Balge Local Government Area I'd Borno state, assuring that, they will not allow such incident to happen again.

He added that the prayers and commiseration of Borno people go to the families of the victims, the Nigerian army and United Nations in general, pointing out that, this attack and other similar incidents like the abduction of the schoolgirls in Dapchi , Yobe state were unfortunately the unpleasant consequences of the heavy defeat the boko Haram insurgents suffered in the hands of our military and the visible manifestations of their desperation to portray themselves as a formidable force.

He however noted that it was gratifying that our gallant security forces were already on top of the situation and the remnants of the recalcitrant boko Haram insurgents have long become a spent force, stressing that, the president has aptly described their current desperable actions as the last kicks of a dying horse.

Governor Shettima said on the issue of relocation of IDPs to their original homes, especially, those from Bama, the state government has made considerable progress in its determined efforts to ensure that all of them were safely returned, noting that, the reconstruction and rehabilitation works as well as other auxiliary activities precedent to the return of the IDPs have either been completed or in the final stage of completion.

Declaring that IDPs from Bama would soon be relocated to their respective homes, Insha Allah, Shettima drew the attention of the Security Council to the increasing cases of drug abuses, especially, among the youths and its concomitant negative effects in social stability and economic development.

He described the situation as very alarming and worrisome that need to carefully analyze the issue and come up with a workable solution.