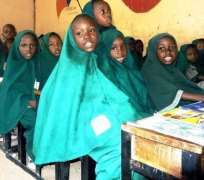 The Borno State Government has closed female boarding schools in 25 local government areas of the state to forestall abduction of schoolgirls by the Boko Haram insurgents.

It will be recalled that in the past three years, over 200 schoolgirls were abducted in April 14, 2014 at GGSS Chibok in Chibok LGA of Borno State while 110 schoolgirls from GGSTC Dapchi were again abducted few days ago in the neighbouring Yobe State.

Speaking to journalists on the modalities put in place to prevent further abduction of students from schools, the Borno State Commissioner of Education, Comrade Inuwa Kubo, said all female boarding schools except those in Maiduguri and Biu, had been closed.

With this, it means female boarding schools have been closed in 25 of 27 local government areas of the state.

“We have decided to relocate all our girls in boarding schools within Maiduguri or Biu because we do not want a recurrence of the Chibok Case.

“If the entire security situation is not addressed, one cannot be sure what could happen. If people start seeing that over time there is no more attack, they will know that peace has returned,.

"But in a situation where you cannot move to some parts of the state without an escort and you are hearing that in some cases soldiers are being ambushed, do you deceive yourself and say everything is okay?

“Because they cannot be said to be interested in girls alone; it is just that they found more attraction in abducting girls, there is more to gain by the insurgents when they abduct girls because of the concern the people and government have for the womenfolk.

“We have collapsed all the girls’ boarding schools into Biu and Maiduguri. There are some other communities which operate all-girl schools but are not boarding schools; they have day schools, with the girls going back to their homes to sleep", Kubo said.

Kubo further applauded the police for deploying their men in schools in the state while praying that this was sustained and not an action dictated by emotion brought about by the abduction of the Dapchi schoolgirls.