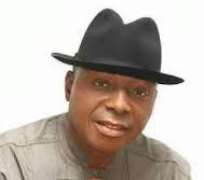 Commissioner for Transport, Delta state, Vincent Uduaghan has warned the incumbent senator representing Delta south senatorial district in the red chambers, James Manager, not to dare to contest the People’s Democratic Party, (PDP), primary not to talk of going back to the Senate come 2019.

The transport commissioner vowed that the Warri People Mandate would use everything at its disposal politically to stop the senator from going back to the National Assembly for another term.

Mr. Uduaghan who reacted to a report credited to Senator Manager that plans have been concluded by an Ijaw group to purchase a nomination form for the senator, stated that someone from another ethnic group should represent the zone in the next dispensation, adding that the Itsekiri and other tribes in the senatorial district would no longer play second fiddle to the Ijaw in the distribution of power.

“The distinguish Senator shouldn’t even think of contesting the party primary not to talk of going back to the Senate. The Warri People mandate will use everything at its disposal politically to stop this from repeating itself. Never again will the other tribes that make up Delta South Senatorial District particularly the Itsekiri play second fiddle to the Ijaw in People’s Democratic Party or any political arrangement in the senatorial district.

“It should be noted that there are three ethnic groups in the district namely Itsekiri, Isoko and Ijaw. When participatory democracy returned in 1999, the Isoko had the first shot with Senator Stella Omu, who served for a term. In 2003, the Ijaw presented Senator James Manager who still represents the zone. This cannot and will never be the fairness and equity the PDP stands for. Unless they are making us believe that impunity still exists in the party which we don’t want to believe.” Uduaghan said.