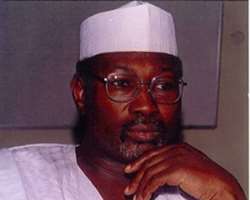 Attahiru Jega
Political parties and professional group on Wednesday welcomed the appointment of a former President of the Academic Staff Union of Universities, Prof. Attahiru Jega, as the new chairman of the Independent National Electoral Commission.

The parties — the Peoples Democratic Party, the All Nigeria Peoples Party, and the Mega Summit Movement — said in separate reactions that the Kebbi State-born activist, had the pedigree to conduct flawless elections in the country in 2011.

But their belief was contested by two civil society groups — International Society for Civil Liberties and the Rule of Law and Coalition of Democrats for Electoral Reform — which argued that Jega's association with the former INEC Chairman, Prof. Maurice, made him unfit for the job.

They stated that Jega, who is the current Vice-Chancellor of the Bayero University, Kano, could not conduct free and fair elections in the country.

Commending the National Council of State and Jonathan for the appointment, the PDP, in a statement by its National Publicity Secretary , Prof. Rufai Alkali, said it believed that Jega would bring his wealth of experience as a professor of political science to bear in the performance of his new assignment.

It therefore called on the Senate to expeditiously confirm the appointment of the BUK VC, whom it described as a patriot and an erudite scholar.

The statement reads, 'The PDP wishes to express its delight at the choice of Jega as the INEC Chairman by President Jonathan.

'The PDP congratulates the President and the NCS for this nomination of an erudite scholar, an accomplished administrator and a deeply committee patriot with a track record of integrity and national service.

'The PDP also congratulates Jega on this historic responsibility bestowed on him and believes that he will bring his wealth of experience as a notable political scientist to bear at this critical moment in the evolution of our democracy.

'By this choice of a neutral umpire, who was a member of the Justice Muhammadu Uwais-led National Electoral Reform Committee, the President has clearly demonstrated his commitment to enhancing the integrity of the electoral process.

'We call on the Senate to expeditiously confirm the nomination of Jega and the new national commissioners in order to give them enough time to prepare for the forth coming general elections.'

In its own reaction, the ANPP called on Jega to create a 're-branded INEC by flushing out all bad eggs' in the commission as soon as the Senate ratified his appointment.

The party's Director of Publicity, Mallam Sabo Muhammed, made the call on behalf of the party during an interview with the News Agency of Nigeria on Wednesday.

Muhammed, a former Public Relations Officer of ASUU when Jega was its national president said, 'Notwithstanding Jega's credibility and pedigree, government must create an enabling environment for him to conduct a free, fair and credible elections in 2011.

'Government must assure the new INEC helmsman of all necessary support, first, by ensuring the neutrality of security agencies during and after the conduct of the 2011 elections.''

He added that ''the new INEC chairman must also be allowed to appoint persons of like minds as resident commissioners to avoid unnecessary frictions.'

On its part, the MSM said the appointment of the university administrator as INEC chief was a major victory for Nigerians , who have for a long time had agitated for an electoral umpire with high pedigree and integrity.

The movement which was recently registered by 'INEC said the choice of Jega,' an icon of the democratic struggle' had restored hope and opened a vista of faith in Nigeria's electoral system ahead of the 2011 elections.'

The Secretary of the MSM, Mr. Olawale Okunniyi, who spoke on behalf of the group on Wednesday, also hailed the selection of Prof. Lai Olurode and other members in the new board of INEC.

Okeniyi also disclosed that the movement would join eminent political leaders, stakeholders and icons of Nigeria's democratic struggles to mark this year's democracy day on June 12, 2010 at the Ikeja residence of the late Chief MKO Abiola, the winner of the June 12, 1993 presidential election.

Also on Wednesday, the Nigerian Institute of Public Relations described the appointment of Jega as 'a birthday gift by to Nigerians on the country's 50th independence anniversary.

The institute's President, Alhaji Muhammed Abdullahi, said, 'The appointment of Jega as the new INEC boss is a good birthday gift to Nigeria because he is the type of man Nigerians have been searching for such an assignment.'

He added said that with this appointment, Jonathan 'can beat his chest to have fulfilled 75 per cent of his promise to Nigerians for an electoral reform that will usher in credible elections and credible leaders in 2011 at all levels.'

The NIPR boss expressed optimism that with Jega on the saddle, ''INEC will scale through as Nigeria's electoral umpire.''

He , however, called on the Federal Government to give the new INEC boss a free and unfettered access to discharge his duties to avoid the mistakes of the past.

Abdullahi also advised the new INEC boss to be steadfast and courageous in his new assignment, adding that 'the whole world is now looking up to him as the electoral messiah Nigerians have been yearning for.'

But two civil society groups — the ISCRL and CODER— differed, saying there were moral questions in the appointment of Jega.

CODER's Coordinator, Mr. Ayo Opadokun, who spoke with one of our correspondents in Lagos, said that the new INEC chief could not conduct free and fair elections in 2011.

''Let me give his antecedent, when he was the President of ASUU, Iwu was his deputy. And when Iwu became INEC chairman, Jega was a consultant to INEC. He is not a credible candidate for the job,' Opadokun said.

Aligning with CODER's position, the ISCRL said through its Board of Trustees Chairman, Mr. Emeka Umeagbalasi, that Jega was 'an amenable ally of Iwu.'

It said Jega's appointment confirmed its fears that Jonathan was looking for a malleable person to appoint into the office of the Chairman of INEC.

It added that Jega's long time association with Iwu was likely to affect his performance as an unbiased umpire in the Nigerian electoral process.

Like CODER, the group said that 'Iwu served as Vice- President of ASUU when Jega was president, while Jega was a consultant to INEC when Iwu was INEC chairman.'

The group added that Jega's appointment as BUK Vice-Chancellor was done by former President Olusegun Obasanjo, whose government believed in 'do-or-die approach to winning elections' moderated by Iwu.

Meanwhile, some residents of Jega town in Kebbi State on Wednesday offered prayers for Jega to succeed in his new assignment.

NAN said that a prominent Islamic cleric, Alhaji Abbas Jega, led the prayers for Jega who is a ' son of the soil.'

Alhaji Jafaru Jega, a journalist, said that Jega's father, the late Alhaji Mahmud Jega, was a Permanent Secretary in the defunct Northern Region, 'who was less bothered about materialism.'

'Jega too inherited the qualities of his late father,'' he added.