Herdsmen crisis: Nigeria Army to fish out perpetrators of deadly attacks in Benue, Taraba and Adamawa 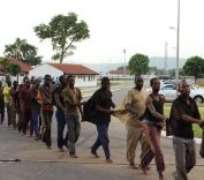 The Nigerian Army on Sunday warned arsonists and killers in Benue, Taraba and Adamawa states to desist from their acts or “face decisive action by troops.

A statement by Brig.-Gen. Texas Chukwu, the Director of Army Public Relations, said the army and other security agencies were already working assiduously to identify and arrest all those involved in those acts “regardless of their disposition in the society, including government functionaries”.

Chukwu said the attention of the army had been drawn to the continued disturbing, senseless killings and wanton destruction of properties in the three states and “strongly warns the perpetrators of these crimes to desist forthwith”.

“We would like to unequivocally reiterate that the Army Headquarters warns the arsonists and the killers to stop or face decisive action by troops.

“Our Rules of Engagement (ROE) are clear on arson and murder, therefore, no such criminal acts would be allowed in any of the aforementioned states.

“The public is please reminded that when troops are called out for internal security operations, they are not to joke or persuade anyone.

“We have warned our commanders on the ground to take decisive actions or face court martial,” the army spokesman threatened. (NAN)