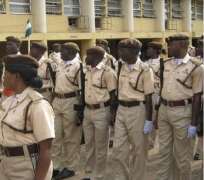 The officers were arrested for allegedly trying to facilitate the trafficking of six underage girls to Omar and Kuwait on an Ethiopian Airlines flight.

The spokesperson for the Lagos Airport Police Command, DSP Joseph Alabi, confirmed the development to the News Agency of Nigeria (NAN) in Lagos.

Alabi said,:“I have been briefed by my men that the immigration officers were arrested by the Federal Airports Authority of Nigeria (FAAN) Aviation Security (AVSEC) officers, who were monitoring activities at the departure hall.

“I learnt the officers have been transferred to the National Agency for the Prohibition of Trafficking in Persons (NAPTIP) for further investigation into the matter.”

He said the Comptroller-General of Nigeria Immigration Service, Mr Mohammed Babandede, had been briefed and had ordered that a thorough investigation be carried out.

He said the NIS boss also directed that the two officers should be referred to the headquarters where appropriate disciplinary action would be taken against them. (NAN)