It Is Madumere We Want – Imolites In Diaspora

... SAY NO TO IMPOSITION, INEXPERIENCED HAND
By Kenneth Nwoke 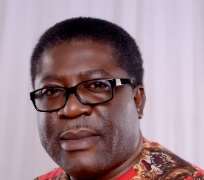 The group made their stand known in a statement titled: A clarion call on Prince Eze Madumere to contest for 2019 Imo State Governorship election signed by the President, Mr. Joseph Eke, General Secretary, Mr. Chukie Ajoku and the Publicity secretary, Mrs. Dean Akujobu.

The group stated their reason for adopting Prince Madumere as their choice candidate for governorship election come, 2019 is not unconnected with his wealth of experience in governance, private and public sectors.

They also argued that the State needs a seasoned administrator, which they readily found in Prince Madumere, whom they said has proven democratic character

The statement reads; “We cannot afford to have an experimenting governor who may not appreciate the seriousness and the dire consequences of lack of effective governance."

The group also frowned at the said effort of Governor Okorocha to impose his son-in-law on Imo people.

They therefore urged Prince Madumere to contest governorship election, come 2019, assuring him of their support to ensure he succeeds.