Trump and the Russians: A new book describes how it all began — at a Las Vegas nightclub 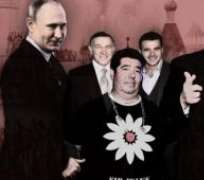 There is no record of what acts were performed there the night Trump attended. The so-called Steele dossier, prepared by former British spy Christopher Steele, contains allegations that while in Moscow later that year Trump had prostitutes urinate on a bed in his hotel room — an episode that was supposedly secretly captured by Russian intelligence agents on tape. Trump has strongly denied that allegation.

According to an account that Goldstone provided the authors, Trump's main interest during the nightclub visit in Vegas was in securing a business deal with Agalarov and his father.

“When it comes to doing business in Russia, it's very hard to find people in there you can trust,” Trump told Emin Agalarov, according to Goldstone's account. “We're going to have a great relationship.”

The excerpt published today portrays Trump in Moscow as obsessed with scoring a meeting with Russian President Vladimir Putin, whose approval would be necessary for the Trump Tower project to proceed, and with whom Trump was cultivating a largely one-sided bromance. As the time of the pageant broadcast approached, Trump kept asking, “Is Putin coming?” the authors write — and they describe how he was stood up by the Russian president, who cited a previously scheduled meeting with the Dutch royal family, which had been delayed by a Moscow traffic jam. Instead, Putin sent a gift of a lacquered box, which was later delivered to Trump Tower, containing a personal letter whose contents have never been disclosed.

But, the authors write, Trump sought to hide his disappointment with a suggestion to an associate that the Miss Universe pageant could still announce Putin had attended anyway. “No one will know for sure if he came or not,” Trump said.

The seeds of the relationships between Donald Trump and key figures in the Russian business and political worlds — now the subject of special counsel Robert Mueller's investigation — were planted at least five months before Trump's now famous 2013 trip to Moscow, during a previously unreported visit to a raunchy Las Vegas nightclub with the son of a prominent oligarch and Putin ally, according to a new book about Trump and his Russian ties.  The book is excerpted today  in Yahoo News and Mother Jones magazine.

The book also reveals a January 2015 meeting at Trump Tower between Trump and two key figures in the Russia probe — the oligarch's son, pop singer Emin Agalarov, and his publicist, Rob Goldstone — during which the real estate mogul strongly hinted about his plans to run for president. Both Emin Agalarov and Goldstone have come under scrutiny because of their pivotal roles in setting up the notorious June 2016 meeting at Trump Tower by promising Trump campaign officials “high-level and sensitive” information from the Kremlin that would “incriminate” Hillary Clinton.

Some of the contacts and meetings among Trump, Russian billionaire Aras Agalarov, his son, Emin, and the British publicist Goldstone are detailed for the first time in the book,  “Russian Roulette: The Inside Story of Putin's War on America and the Election of Donald Trump,”  by authors Michael Isikoff, the Chief Investigative Correspondent for Yahoo News; and David Corn, the Washington bureau chief for Mother Jones. The book will be released on Tuesday, March 13.

The excerpt being published today by Yahoo News and Mother Jones explores the events surrounding Trump's November 2013 visit to Moscow to oversee the Miss Universe pageant, and to vigorously pursue his long-standing dream of building a Trump Tower in the Russian capital. A deal was reached for the project with Aras Agalarov, an oligarch known as “Putin's builder,” with financing by a bank controlled by the Russian government.

That agreement, in turn, grew out of a June trip to Las Vegas, where Trump was presiding over the Miss USA pageant, a preliminary to Miss Universe. It has previously been reported that Trump dined with the Agalarovs, Goldstone and others at a Las Vegas restaurant while there. But as the book reveals, Trump later that night joined Emin Agalarov, Goldstone and the reigning Miss Universe, Olivia Culpo, for an after-party at a nightclub called the Act, known for shows, extreme even by Vegas standards, that simulated acts of sadomasochism and bestiality and one (called “Hot for Teacher”) in which female dancers pretended to be college students urinating on their professor. (The club, the book notes, laid in a supply of Diet Coke for the teetotaling Trump.) The club was the target of an undercover investigation by the Nevada Gaming Commission at the time of Trump's visit, and many of its acts — including those involving simulated urination — were later banned by a Nevada state judge as “lewd” and “offensive,” court records obtained by the authors show. The Act has since closed.

It was during this visit that Trump reached his deal with Agalarov's company, the Crocus Group, to build a Trump Tower Moscow. As the authors report, the deal was memorialized with a formal “letter of intent” between the Trump Organization and Crocus — and the project was to be financed by Sberbank, which was majority-owned by the Russian government. Donald Trump Jr. was placed in charge of the project.

In February 2014, Ivanka Trump flew to Moscow to scout potential sites for the project with Emin Agalarov. But international events would quickly intervene. Weeks after Ivanka's visit, the Obama administration and the European Union imposed tough sanctions on Russia in response to Putin's annexation of Crimea and his military intervention in Ukraine. It would be a kick to Russia's faltering economy, already struggling because of the plummeting price of oil. And one round of sanctions imposed by the EU targeted Russian banks in which the Russia government held a majority interest — that included Sberbank.

In this environment, the plans for the Trump Tower in Moscow crumbled. According to the Trump Organization, Ivanka Trump, after touring Moscow with the younger Agalarov, killed the deal for business reasons. But Goldstone, Emin Agalarov's publicist, suspected the demise of Trump's project with the Agalarovs influenced Trump's view of sanctions: “They had interrupted a business deal that Trump was keenly interested in.”

The future president, Goldstone recalled, was watching a rap video that ridiculed him. Goldstone asked, “Have you listened to the words?”

Trump replied, “Who cares about the words? It has 90 million hits on YouTube.”

Seventeen months later, in June 2016, Goldstone would return to Trump Tower — this time escorting a Russian-led delegation dispatched by the Agalarovs, offering potentially derogatory information on Hillary Clinton, courtesy of the Kremlin, to the top officials of Trump's presidential campaign. That visit — and the Trump White House's responses to questions about it — have become a prime focus of Mueller's investigation.

Emin Agalarov has not yet performed at the White House.