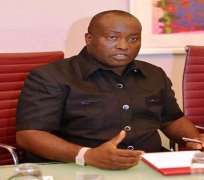 Dr Patrick Ifeanyi Ubah does not need any more introductions. By a dint of hard work, determination, focus and the God factor, he has grown to become a household name in Nigeria, particularly in critical sectors of the Nigerian economy. From oil & gas to sports, to politics and then charity, he traverses the nation like a colossus in constant search of where and how to improve humanity.

A man who does not like to see humanity in general and Nigerians in particular undergo unwarranted suffering, Ifeanyi Ubah, burning with patriotic zeal, as usual, once opened his gargantuan oil facilities to Nigerians during one of the most difficult and biting fuel scarcities the nation has experienced in recent times.

Oil marketers had embarked on a strike action from 18th of May, 2015. It got so bad things were beginning to fall apart so fast and so badly. Nigerians were at the mercy of the oil marketers as critical sectors of the nation started shutting down in quick succession. From the health sector, the aviation, the power, the road transport, telecommunications, the media, household, financial sector, particularly the banks, hospitality and other sectors that serve as the livewire of the nation’s very existence were haemorrhaging profusely.

Only a quick intervention could save the nation from an imminent total shutdown.

While the oil marketers seemed prepared for a protracted strike action, the government could not find a quick solution to the crisis. Nigeria was gradually ebbing away while the citizens suffered.

Then came the unexpected. Ifeanyi Ubah, the CEO of Capital Oil & Gas broke ranks. He could not stand the sufferings his fellow citizens were going through even though the oil marketers’ case was genuine. Government owed them billions of naira and there seemed no immediate plans to pay them. To drive home their point, they were left with no option but to embark on that strike.

“On Saturday 16th May 2015, we received an SMS ordering the suspension of loading activities in all depots from Monday, 18th May, 2015. We later realized that this directive was as a result of unpaid funds owed to transporters by oil marketers who in turn are owed by the Federal Government. This development has resulted in immense hardship to our fellow country men and women. We believe that a better solution can be pursued towards solving this problem in a way that does not adversely affect our dear citizens.

“Capital Oil and Gas has watched with so much pain, the suffering and hardship our citizens have been subjected to as a result of scarcity of petrol, diesel, aviation fuel and house hold kerosene. We are deeply pained to hear that hospitals cannot perform surgeries, laboratories are unable to carry out much needed tests especially for emergency patients leaving such patients at risk of dying, radio stations are shutting down, communication is being affected as MTN and other telecommunications companies have announced an impending shut down while homes, offices and key facilities nationwide are experiencing blackouts. In some parts of the country, petrol is already selling at an all-time high of N1,000 per litre. Our citizens have left their homes and are now sleeping in fuel stations, facing the risk of robbery attacks and other attendant risks…

“We are constrained at this point and have decided that two wrongs cannot make a right. We will not be part of this... Therefore from this minute, we shall take the risk of opening our facilities and commence swift loading and distribution of products nationwide

“Our facility has the capacity to load over 13 million litres of product before dawn. This comes to approximately 400 trucks of petroleum products. With this act, it is our belief that once again our citizens will begin to smile, return to normal family and work life. We call on other petroleum marketers to follow suit and save our nation from this impending economic and social crisis. This is a period that requires patriotism and service to fatherland. Let’s join hands to help our fellow citizens and save Nigeria. We also call on striking bodies to call off the strike action. Let us work together for the betterment of our people”

The foregoing sums up the patriotism mixed with human kindness inherent in Ifeanyi Ubah.

His contemporaries in the same situation would have helped to tighten the noose on Nigerians knowing full well that the eventual outcome would make them stupendously richer. But not Ubah; he chose the path of charity over profits.

He had the monumental capacity to either continue to hold the government to ransom through the strike action called by the oil marketers, thereby subjecting the people to pains, or ameliorate the sufferings of the people even if it meant non-payment of debts owed him and other marketers by government. For a man who would never use his capacity to oppress the poor, the Capital Oil & Gas Chief Executive chose the latter.

There are many with similar capacities but who use theirs to only win favours from powerful government officials or the highly placed in the society. Before such people could do any good, they would usually consider what it would profit them. But it is not so for Ifeanyi Ubah.

Just recently, through his Ifeanyi Ubah Foundation, he went on a Prison Decongestion programme in conjunction with another Foundation, the Tino Foundation. This programme has offered free legal services to some inmates at the Nnewi Prison with a view to ensuring speedy trial and defence of their fundamental human rights. The exercise is expected to cover other prisons.

These prisoners have nothing to give back but their simple appreciation and glory to God. For a man like Ifeanyi Ubah, this is more than enough.