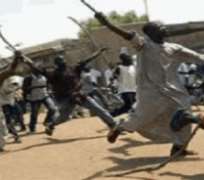 About 20 persons have been reported killed and 300 cows stolen, following a fresh outbreak of ethnic violence on the Mambilla Plateau in Sardauna Local Government Area of Taraba State, yesterday. A fleeing resident, Saadu Mogoggo, who said his house was attacked at Leme suburb of Gembu, said two of his brothers were killed on Saturday evening and their cattle rustled by a group he identified as the Mambilla Militia.

His words: “As I speak with you, we are yet to bury their corpses. The ethnic militias attacked our residence in Leme, where they killed our father last month. During this attack, the Mambillas took away over 100 cows. “My two younger brothers reported the matter to a nearby military base and a soldier was attached as escort to retrieve the stolen cows.

Unfortunately, in the process, my younger brothers were both killed while the soldier fled with injury.” Abdu Gagarau, another resident of the area, who said he was speaking from hiding, said: “The burning and killing by herdsmen continued till early this morning (yesterday). “Since last Thursday they have been attacking our settlements and over 20 people killed. Some were buried and over 300 cattle stolen by the militias. “The Mambila ethnic group is known for attacking other tribes. They attacked the Panso in 1982, the Fulani in 2002 and in 2017. When eventually we retaliate, the normal shouts of herdsmen will start. Let government be proactive and come to our rescue.”

Fulani cry to govt A Fulani community leader in the area, Mr. Ahmadu Nguroje, called for government and security intervention. Mr. Nguroje said: “At least 20 people are feared killed, looting of houses, shops and burning down to ashes by the Mambilla militias along Tapare and Yerimaru axis have been recorded here in Sardauna Local Government Area of Taraba State.

“About 12 others were also injured and are on admission at a hospital in Gembu.” The lawmaker representing Nguroje and Gembu constituency in the state House of Assembly, Bashir Muhammad, confirmed the latest disturbances. He said: “There have been violent and systematic killings of Fulani nomadic herdsmen in the remote areas in Mambilla Plateau.

“It is unfortunate that while efforts are being made to restore peace, the killings continued unabated with many people feared killed between Thursday and Sunday (yesterday), just as dozens of livestock were killed or injured. I was even told that over 200 cows were rustled. “Security is grossly in adequate because some of the affected villages are in hinterlands that can take one or two hours to access. We want more security personnel, particularly soldiers, to ensure peace.”

Governor speaks Reacting, Governor Darius Ishaku, who spoke through his Senior Special Assistant on Public Affairs, Emmanuel Bello, called for an end to the violence.

His words: “Anyone who takes any life, irrespective of religion or tribe, is a criminal; whether it is on the summits of Mambilla or the plains of Southern Taraba and anywhere in this state. And we shall deal with them as criminals. “We are committed to an amicable resolution of the crisis in the state and peaceful co-existence of all ethnic nationalities,” attributing the renewed crisis to “disagreement between two ethnic groups.”

The Police spokesperson in the state, David Misal, told newsmen that four people were confirmed killed from both sides of the ethnic groups, adding that security officials had been dispatched to the area to restore peace, but that no arrest had been made. Investigations revealed that the crisis started on Thursday over a land dispute between nomadic Fulani and Mambilla in Yerimaru village, which spread into neighbouring villages.