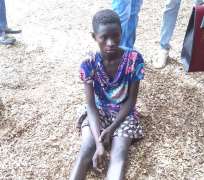 An 18-year old secondary school dropout, one Efemena Chinedu, has admitted that he raped his 6 years half-sister and murdered his 8 year half-brother as a result of not being loved by his father.

Efemena, gave the confession while being paraded by the Delta State Police Commissioner, Muhammad Mustafa.

Chinedu had allegedly killed his eight-year old half-brother and raped his six-year old half-sister at the residence of the family in Ofagbe, Isoko North Local Government Area of Delta state.

Efemena was paraded alongside other crime suspects yesterday by the Commissioner of police Delta command, Mr. Muhammad Mustafa. The suspect admitted committing the crimes, adding that he did it as a result of alleged hatred by his polygamous father.

He said his father forced him out of school to go and learn trade as an apprentice.

Hear him, "I sat on him while he was sleeping, that was how he died. But I did not know that my sister, saw me, so, she reported me to my father who took me to the police station".

“My father has five wives. He loves his other children more than me. That was why he asked me to stop school and go and learn to be an electrician.

While saying that his father's hatred led him to rape his sister, the suspect said that he was "pushed into the act by an unknown spirit" to kill his brother.

According to him, “the spirit is inside me,' it is always pushing me into doing bad things”.