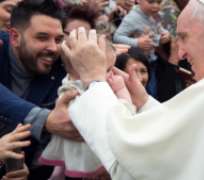 VATICAN CITY –   Pope Francis has made the devotion to the Virgin Mary a new fixed celebration in the Roman Catholic calendar.

The Vatican published a decree Saturday in which Francis declared that the Mary “Mother of the Church” feast would be celebrated on the Monday following Pentecost. This year, it falls on May 21.

The decree said Francis wanted the devotion to “encourage the growth of the maternal sense of the Church in the pastors, religious and faithful, as well as a growth of genuine Marian piety.”

History’s first Latin American pope is particularly devoted to Marian piety and frequently refers to the church as “mother.”

In 2016, Francis set another feast day for another key woman in Christ’s life, declaring July 22 as the feast of St. Mary Magdalene.