Gana leads his men in deployment to schools in North East 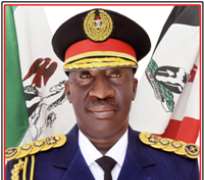 According to the directive, the Commandant General of NSCDC was directed to relocate to the northeast and liaise with the theatre commander of #OpLafiyaDole and Govs of Yobe, Borno & Adamawa to ensure deployment of personnel to all schools in liberated areas in the states.

The Presidency said that the directive has become necessary to forestall a re-occurrence of the attack on innocent school children.

Gana was received by the Commandant, Major General Nicholas at the headquarters of Military Command and Control Centre.