GUNMEN KILL SEVEN IN ATTACK ON NATO CONVOY IN PAKISTAN 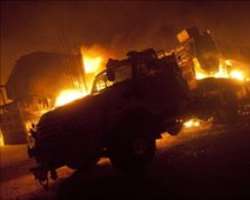 The overnight assault took place 10km (six miles) outside the city – the closest such attack yet to the capital.

Up to a dozen militants opened fire, setting 20 trucks alight and destroying millions of dollars of equipment.

Meanwhile heavy fighting has taken place in the north-west between militants and the army.

'Indiscriminate firing'
The Nato trucks were carrying supplies to alliance troops in Afghanistan.

“The attack took place around 2335 local time (1835 GMT) and we are still trying to find out how this attack has happened,” said Shah Nawaz, the head of the police station in Tarnol, where the trucks were parked at a roadside depot.

“The attackers walked into the depot and started indiscriminate firing,” he told Reuters news agency.

Kalim Iman, inspector general of Islamabad police, said that police were searching for the suspected militants, who escaped in two cars and on motorbikes to a nearby forest area.

The BBC's M Ilyas Khan says that the attack is the most brazen to be carried out by militants in Islamabad, although since September 2008 Nato convoys have been regularly targeted in Balochistan and in the cities of Karachi and Peshawar.

The Taliban have hijacked lorries, stolen their cargo and kidnapped their drivers.

On one occasion in November 2008, militants captured Humvee armoured cars destined for Afghanistan and filmed themselves triumphantly driving off with their booty of Nato vehicles.

The latest attack is a brutal reminder to Nato commanders in Afghanistan that their lifeline is vulnerable, says the BBC's Orla Guerin in Islamabad.

Analysis
Orla Guerin,
BBC News, Islamabad
The fact that this time the strike was so close to Islamabad and was carried out so audaciously will be a cause of concern to the authorities here.

It will renew anxiety in Afghanistan about trying to find alternative routes.

Militants are being flushed out of one area (by Pakistani military offensives) but are surfacing in another.

It is very clear the militants have not been fatally disrupted as the government likes to claim.

We do not yet know if this is the work of the Taliban leader Hakimullah Mehsud or his men, but certainly these convoys are targeted by militants who are angered by the fact that they are travelling so regularly on Pakistani roads.

In addition to those killed, police said at least four others were injured. The casualties were thought to be the drivers of the trucks and other local people.

A senior policeman responsible for the area where the attack took place has been suspended for possible dereliction of duty, officials say.

Truckers protesting against the attack briefly closed the grand trunk road linking Lahore, Rawalpindi and Peshawar before being persuaded by police to end their protest.

Some three-quarters of the supplies needed by the 130,000 US-led international troops in Afghanistan are transported by land from the Pakistani port of Karachi.

The regular attacks have compelled Nato and American forces to look for other supply routes, principally through Central Asia.

This latest attack comes after months of relative calm around Islamabad.

In the latest fighting in the north-west of the country, the Taliban killed at least six soldiers, including an army captain, in an ambush near the town of Ghaljo in Upper Orakzai tribal region, officials say.

They say that about 12 soldiers were injured in the ambush, which took place on Tuesday.

An official told BBC Urdu's Riffat Orakzai that a security force convoy was heading from Dabori to Ghaljo when it was ambushed from both sides along a narrow mountain track.

That led to aerial and artillery attacks on suspected militant hideouts in Upper Orakzai region which went on for several hours, the official said, killing more than 30 militants.

The army's claims could not be independently verified.

Correspondents say that the attack comes just over a week after the army said its operation in the region had been successfully completed.

While the security forces have conducted widespread searches in Lower Orakzai over the last four months, there had been no action other than aerial bombings in Upper Orakzai.