What If Gov Okorocha Had Succeeded In Removing Imo Apc Exco? 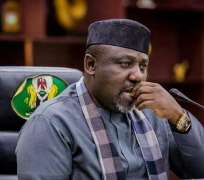 It is an established norm that "whatever that is thrown up must surely come down". This is called the Law of Carma. I had taken God for "granted" since the issue of Uche Nwosu, Ugwumba this, Ugwumba that, Endorsement this, Endorsement that kept ranting the air as if election is won by mere prediction. My annoyance is how would God be looking at Ndi-Imo from the heaven and allow King Nebuchadnezzar to devour his children?

However, I am sure that one would have tagged me a wicked and stupid person if I had ever told them how Governor Okorocha has made himself a Nebuchadnezzar who ruled Babylon in the Chaldean Dynasty and reigned for many years. According to the Bible, he conquered Judah, Jerusalem and sent the Israelites into exile. This is exactly what would have happened to the good people of the state if king Nebuchadnezzar succeeded in removing the duly elected APC Executive.

If Governor Okorocha's plans to remove the APC leaders in Imo State had gone through, the level of unemployment in the state would have increased drastically. But why will Governor Okorocha have interest in everything in Imo State, interest in people's lands, buildings, Bailout funds, Paris Club funds, including people's wives? Anyway, when the gods want to kill a man, they first make him mad, and this is the position Nebuchadnezzar has found himself today.

To be frank with you, the reason why the Nebuchadnezzar is hell bent to foist his son-in-law, Uche Nwosu as Governor in 2019 is because It appears obvious to him that he has committed huge attrocities, such as looting of public funds, conversion of public properties into personal use and misappropriation of tax payers money. All these offences committed by king Nebuchadnezzar of Imo State are impeachable but since our Lawmakers have abandoned their constitutional duties for mere political endorsement, we have no option than to wait on God to intervene as He has started intervening.

A leader who cannot tell those he is leading the truth is worse than the devil. In Imo State, king Nebuchadnezzar has continued to deceive APC Executive to believe that he would work with them, not knowing that he had prepared to sack them from their job...oh what a wicked Nebuchadnezzar!!!

To show their loyalty to king Nebuchadnezzar of Imo State, some of these APC Executive turned themselves into endorsing "nwa-nza" even when their conscience did not please them, but to make ends meet since the Nebuchadnezzar denied them of their legitimate funds, they found themselves in such pitiable condition!

I don't mean to insult anyone, but beware; Governor Okorocha is a wicked, calous and uncaring man who only exposes his teeth recklessly as if he has the interest of the masses at heart, while having different mindset against the people.

If Governor Okorocha, the king Nebuchadnezzar of Imo State could ignore his loyalists who fought tooth and nail when the going was rough in place of "ordinary nwa-nza" for Governor, I need no magician to convince me that king Nebuchadnezzar is heading to a crash, doom and death. May his wicked soul rest in pieces...amen.

Austin Chikwado writes from Owerri, the capital of Imo State