2 stowaways fall off from flying plane 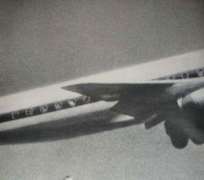 Two stowaways fell to their death Monday from an airplane as it took off from an airport in Guayaquil, Ecuador on a flight to New York, authorities told local media.

Details of the incident were sketchy with authorities not saying whether a commercial airline was involved.

Officials said the bodies of two men, between 25 and 30 years of age, were found on the southern end of the runway of the Jose Joaquin de Olmedo Airport in Guayaquil.

“Two people got into the landing gear and as the plane took off the system either ejected them or they lost heart” and let go, General Marcelo Tobar was quoted as telling local media.

Prosecutor Carlos Bustamante said the plane, which returned to Guayaquil, had come from Peru and was on its way to New York.

Airport operations were closed for an hour after the incident, the Civil Aviation Office said. (AFP)