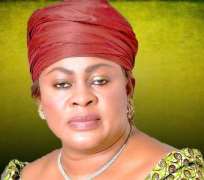 A former Minister of Aviation, Stella Oduah, has been quizzed by the Economic and Financial Crimes Commission (EFCC) over an N9.4 billion alleged fraud during her tenure.

Oduah repotedly arrived EFCC headquarters at 11am on Monday to honour a longstanding invitation.

The Senator representing Anambra North was still being grilled as at 6pm.

“She was invited over allegations ordering on abuse of office and money laundering. One of the allegations concerns fraud in the N9.4bn ISEC contract for security installations in some airports,” a source in EFCC said.

Earlier in the month, Oduah issued a statement to deny the alleged diversion of funds under her watch as minister.

Oduah who was in charge of the Aviation Ministry from July 2011 to February 2014, maintained that all contracts awarded during her tenure followed due process.

“What we did in aviation was so far reaching that it had never been done before, it was so unprecedented,” she said.

She said the Nnamdi Azikiwe International Airport, Abuja, was in such a bad shape, that even the restrooms were not usable.

“Most of the airports were worse than motor parks.

“We took them on and efficiently and in a very timely manner changed every single one of them: and we did not just change that, we changed the safety of the Nigerian airspace,” Oduah had said at the time.

In 2013, Oduah was embroiled in car purchase allegations, when reports emerged that she had compelled the Nigerian Civil Aviation Authority (NCAA) to procure the vehicles for her.