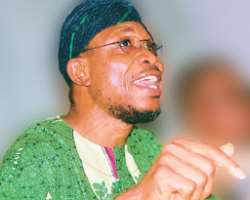 Aregbesola
AN Abuja High Court on Tuesday, criticised the Attorney-General of the Federation and Minister of Justice, Mr Mohammed Adoke (SAN), for lack of diligent prosecution in the alleged forgery of police report case, levelled against a governorship candidate of the Action Congress in Osun State, Mr. Raufu Aregbesola.

Justice Abubakar Talba had faulted sudden decision of the AGF to take over the prosecution of the case at the resumed hearing of the matter.

The police's lawyer, Mr Lawal Rafiu-Rabana (SAN), was expected to continue the case but he was not in court.

But a Senior Assistant to the AGF, Mr. P.C. Okorie, announced his appearance for the AGF, saying that henceforth, the AGF would prosecute the case.

The development prompted Justice Talba to ask what AGF had been doing since the matter started if he was really interested in handling the case.

He said, 'This case has suffered several adjournments at the instance of the prosecution against the accused persons. You should know that justice delayed is justice denied'.

The police is prosecuting Aregbesola and a lawyer, Yinka Okedara, on a six-count charge of alleged criminal conspiracy and forgery of police report.

But Aregbesola and Okedara had a filed a preliminary objection, asking the court to dismiss the charge against them on the grounds that it was in violation of the 1999 Constitution.

The case has been adjourned till September 20.