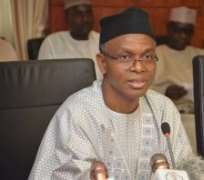 The Kaduna State Government on Tuesday demolished the factional secretariat of the All Progressives Congress (APC) led by Mr Danladi Wada in Kaduna.

The demolition was executed by the State Urban Planning and Development Agency (KASUPDA) at the early hours of Feb. 20.

The government said in a statement on Tuesday in Kaduna that the building housing the factional secretariat was illegally erected.

Mr Ibrahim Husseini, the Director-General, Kaduna Geographic Information Service (KADGIS), said in the statement that the structure, situated at 11B Sambo Close, was removed for flagrant

violations of land use and non-payment of ground rent since 2010.

“This illegal violation of use had begun to distress neighbours who were being forced to endure an influx of thugs and blockage of the road,'' Husseini said.

Husseini, however, stated that the land would be used to provide a green area and a serene place for recreation in the residential neighbourhood.

“The Kaduna State Urban Planning and Development Agency (KAPSUDA) is currently undertaking operations across Kaduna metropolis in compliance with its mandate.

“In partnership with sister agencies, KASUPDA is clearing

Kaduna.
“The Kaduna Geographic Information Service (KADGIS) issued a revocation notice of Statutory Right of Occupancy No. KD. 16712, that covers 11B Sambo Close in the Ungwan Rimi area.

“The appropriate notice of revocation was delivered at 28 Inuwa Wada Road, the registered address of the company that held the title to the property.

“The notice was also delivered to the building in question, and sent by post to the registered address of the previous title holder,'' the statement read in part.

According to Husseini, the land has now been allocated to KASUPDA for the purpose of developing and maintaining a public park that will provide a green area and a serene place for recreation in that residential neighbourhood.

“KADGIS wishes to remind all title owners to be fastidious in complying with the terms of their allocation.

“The purpose of allocation of land cannot be wilfully altered; neither can title holders lawfully neglect to pay their ground rents.

“Since 2016, the government has been taking action on various land related matters, including revoking all undeveloped land titles in the state and directed that all abandoned buildings be developed within three months of the notice.

“KADGIS as the government agency charged with ultimate responsibility on land matters in Kaduna State, calls for the utmost cooperation by the public with all our agencies,'' the statement added.

The News Agency of Nigeria (NAN) recalls that the new secretariat, located at 11B, Sambo Road, was opened on Feb. 15, by the state Acting Chairman of the party (Wada).

Wada, who was the elected APC Deputy Chairman in the state, claimed that the secretariat was recognised by the party's national headquarters.

He also claimed that the party opened a new secretariat due to lack of accessibility of members at the old state office as well as lack of security.

NAN recalls that the Wada-led faction, which claimed legitimacy of the party, had on Feb. 18, suspended Gov. Nasir El-Rufai from the party for a period of six months.

The Wada APC faction said in a statement that El-Rufai was suspended from the party following his refusal to respond to the query issued by the party's State Working Committee.

El-Rufai was earlier on Feb. 15 queried by the Wada-led faction over allegations of anti-party activities among other related offences.

The faction had equally suspended three of the governor's aides, including his Adviser on Political Matters, Malam Uba Sani, and the State Commissioner for Finance, Alhaji Suleiman Kwaru, for similar offences.

It would be recalled that the El-Rufai administration on April 6, 2017, ordered the same agency to demolish the Kaduna residence of Alhaji Inuwa Abdulkadir, the party's North-West Vice Chairman.

KASUPDA officials who demolished the Zonal Chairman's house, located at No. 29 Yakubu Avenue, alleged that the structure was erected in violation of the state development plan.

Meanwhile, Hunkuyi and Wada are expected to react to the development at a news conference about now.