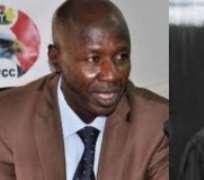 The Federal Government in a bid to clean its house has queried the Acting Chairman of the Economic and Financial Crimes Commission, Mr Ibrahim Magu, and a Senior Advocate of Nigeria, Mr Festus Keyamo, over the corruption charges they filed against the Chairman of the Code of Conduct Tribunal (CCT), Justice Danladi Umar.

This development was revealed in series of letters signed by the Solicitor General of the Federation, Mr Dayo Apata.

A closer look at one of the letters dated February 16, 2018, Mr Magu was ordered to provide response to the query to the Attorney General of the Federation and Minister of Justice, Mr Abubakar Malami, on or before Tuesday, February 20, 2018, according to a report monitored in Channels Television.

He is to explain what informed the filing of corruption charges against the tribunal chairman, having been cleared of corruption allegation two times by the same anti-graft agency.

The query titled “FRN vs Danladi Umar request for briefing,” reads in part:

“I am directed by the honourable Attorney General of the Federation to seek clarification from you as to whether the charges were filed on your instruction or directive and if in the affirmative, what is the compelling basis for doing so?

“This clarification becomes imperative in view of the following background facts. The commission's investigation report dated March 5, 2015, addressed to the Secretary to the Government of the Federation stated as follows: the facts as they are now against Justice Umar raised a mere suspicion and will, therefore, not be sufficient to successfully prosecute for the defence.

“in view of the foregoing, the honourable Attorney General of the Federation requests for your prompt briefing as to the existence of new facts which are contrary to the position in your attached investigation report, sufficient evidence, or other developments upon which the prosecution of honourable Justice Danladi can be successfully based.”

In the same vein, a letter was served Mr Keyamo, who was reportedly engaged as a private lawyer by the EFCC to prosecute the CCT boss, was also requested by the AGF to confirm who authorised him to file the corruption charge against Justice Umar.

The EFCC had earlier filed two counts against Justice Umar for allegedly receiving a bribe of N10million from one Rasheed Taiwo, in the charge signed by Mr Keyamo as a private prosecuting counsel for the anti-graft agency.

The CCT boss was also accused of receiving N1.8million through his personal assistant, Gambo Abdullahi, for a favour to be afterwards shown to the petitioner who was standing trial for a criminal offence before the tribunal.

A date of March 15 was fixed for the arraignment of Justice Umar at the High Court of FCT in Abuja, the nation's capital.

Meanwhile, the EFCC had in two separate letters (in 2015 and 2016) to the Federal Government, through the Secretary to the Government of the Federation, cleared Umar of any wrong doing in the alleged N10 million bribery allegation made against him.