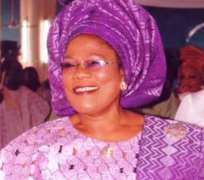 The Nigeria Association of Women Journalists (NAWOJ), State of Osun Chapter has congratulated the state Deputy Governor of the State, Ọtunba Grace Titilayo Laoye-Tomori on the confinement of an award on her as the 2017 Most Outstanding Deputy Governor in Nigeria by Daily Independent newspaper.

In a statement jointly signed by the Chairperson and Secretary of the association, Mrs Motunrayo Ayegbayo and Mrs Florence Babaṣọla, NAWOJ noted that the passion and commitment of Ọtunba Grace Titilayo Laoye-Tomori to the course of governance in the state of Osun singled her out for the award.

According to the statement, "NAWOJ reckoned that the track records of the Osun deputy governor in repackaging the face of education in the state, no doubt, is a testimony to the fact that women could be entrusted with sensitive position of authority in the society."

"The association also expressed her satisfaction in the robust synergy between the state governor, Mr Rauf Aregbesọla and Ọtunba Grace Titilayo Laoye-Tomori which it said is giving room for unprecedented success that the administration is recording in every aspect."

"NAWOJ however encouraged Ọtunba Grace Titilayo Laoye-Tomori not to rest on her oars in supporting her boss; the governor, in fulfilling to the fullness, his pact with people of the state," NAWOJ said.