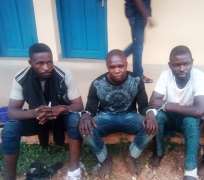 The Osun State Police Command has arrested three armed robbery suspects who robbed some female corps members of the the National Youth Service Corps (NYSC) at Modakeke in Osun State.

The Commissioner of Police in the state, CP Fimihan Adeoye told journalists that the suspects raided the residence of the corps members and carted away their belongings last week and that police was able to arrest them a couple of days after.

According to the CP: "On the 6th of February, a gang of armed robbers attacked the residence of some of our corps members in modakeke at about 02:00 am and dispossessed them of their phones and other valuable items.

He continued:" Before the police could get to the scene, the robbers had taken to flight. The police detectives commenced investigation immediately and eventually we succeeded in arresting the robbers few days after"

"Am so happy to let you know today that the police detective attached to the special anti robbery squad working in close hands with the area commander of Ile-Ife have succeeded in arresting members of that gang.

The CP further explained that most of the materials collected from the corps members were recovered. Adeoye said the suspects would be prosecuted accordingly.