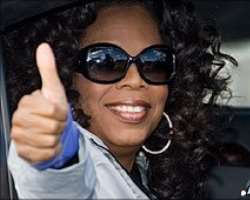 Oprah is launching her new channel next year
Talk show host Oprah Winfrey is to look for a new TV host on a show due to air on her new television network.

Winfrey has teamed up with reality TV producer Mark Burnett for the show, which starts in January when OWN – The Oprah Winfrey Network launches.

Hopefuls are already being invited to upload videos in a number of categories including interior design and cooking.

Winfrey's long-running talk show is coming to an end in September 2011 after 25 seasons.

Burnett told the Associated Press: “Much in the way American Idol finds unknown people, there's no reason we can't find someone who deserves their own show.”

While visitors to Oprah's website can watch hopefuls and vote for them, auditions are taking place in Texas and California this month.

“Try to be authentically yourself. Show energy,” added Burnett, indicating that energy and charisma were the key to being a successful TV host.

The presenter of the programme, which will be called Your Own Show: Oprah's Search for the Next TV Star, has yet to be announced.