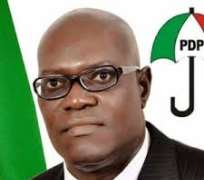 As the political year comes closer, Aniocha North local government area has hit the newsstand again as 10 executive members of the Peoples’ Democratic Party (PDP), in Delta State on Thursday passed vote of no confidence on the LGA chairman,Victor Egbune.

The crisis has been between the local government chairman, Chuks Oseme and members of the lcoal government legislative arm which have been at loggerheads with each other over loyalty to some political godfathers in the council area.

The letter was addressed to the state party chairman, Kingsley Esiso, who is notified that with the vote no confidence vote, Egbune ceases to be the local government chairman of the party.

“We the under listed members of People’s Democratic Party Aniocha North Chapter wish to express with dismay our dissatisfaction with the conduct of our party chairman.

“It is our belief that with the enormous task ahead of us, it has become imperative to cleanse the system of any bad element that would cause us failure in our forthcoming elections.

“In the light of the above facts, we the undersigned members of the local government executive hereby unanimously pass a ‘VOTE OF NO CONFIDENCE’ on PRINCE VICTOR EGBUNE, the local government area chairman for incompetence and misconduct as stated thus: Misappropriation of party funds, Factionalizing the party, Inability to call regular meetings, coordinating an aspirant.

“With this vote of no confidence, Prince Victor Egbune ceases to be our Chairman, we therefore request you sir to authorize the deputy chairman, Mr. Aggrey Abia, to function in acting capacity pending when the chairman is formally replaced.

“We thank you in anticipation of your accelerated response.”

Those who signed the “vote of no confidence” against Prince Victor Egbune are: