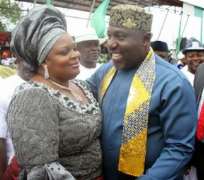 After Imo State Governor Rochas Okorocha announced his readiness to back his son-in-law, Uche Nwosu, to succeed as the governor of the state, the wife of the governor Nneoma Nkechi Okorocha has begun to plot the impeachment of the state’s deputy governor, Prince Eze Madumere, who is believed to enjoy the support of many party faithful in the state.

Sources in the state say that leaders of the All Progressives Congress in the state fear that the party might lose state if they succeed in pushing the governor to make the wrong choice for the party in the state.

The Nigerian Voice learnt the governors wife who is said to wield a huge influence on the governor is determined to ensure that her daughter succeeded her as the first lady in the state.

According to the the source, Lady Okorocha’s grouse against the number two citizen is not unconnected with his popularity, which is said to be giving Governor Okorocha sleepless nights.

It was said that the pressure on the Governor coming from various quarters including powerful people from within and outside the State may not be unconnected to the family plot to foist his son-in-law on Imo people as Governor .

Meanwhile, an Owerri based local tabloid, Trumpeta, on Wednesday broke the news over the impeachment plot against Madumere even though it did not mention those behind it.

Most of the nocturnal meetings to perfect the plot were held inside Government House where the following were involved: The wife of the Governor, Mrs. Nkechi Rochas Okorocha, Chief of Staff, Uche Nwosu, member representing Owerri Municipal in Imo State House of Assembly, Hon. Lugard Osuji and Commissioner for Finance, Hon. Obinna Mbata.

Mbata is said to have been tasked to provide over N1billion naira to lobby the two-third majority of the legislators while Hon. Lugard Osuj will act as liaison between them and Imo State House of Assembly.

The source further disclosed that the wife of the Governor promised Osuji the Speakership of Imo State House of Assembly and to ensure others retain their appointments if the deal is smoothly carried out.

It was said Chief Nwosu, Chief of Staff Government House has promised to allocate landed property to those who will sign for Madumere’s impeachment with Certificate of Occupancy at the choice area of the capital city of Owerri.

He however decried such move, which he said will be counterproductive. He wondered what could have been the reason for such plot since his boss is clean and forthright in any government business he has ever handled in the past.

It was revealed that Mass Solidarity March of over 3000 Imolites for Madumere, endorsing him for Governorship for 2019 may have infuriated the first family,who saw it as a affront against their wishes to install their son-in-law as successor.