The Ambassador Of Succour Comes To Ohaukwu Land 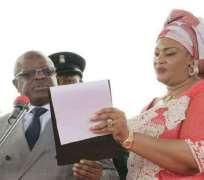 Tomorrow, Tuesday 13th February, 2018, all roads lead to Central School field Ngbo in Ohaukwu L.G.A. as the great and warm people of Ohaukwu hosts the esteemed presence of a personification of the biblical vessel of honour, an uncompromising activist for the protection of the rights of widows and orphans, a divine donation for the upliftment of the less-privileged and the wife of the Governor of Ebonyi state - Her Excellency, Chief Rachael Ogonnaya Umahi [Ezinwanyi di uko 1 of Ohaukwu] - for the inauguration of the Ohaukwu chapter of Rachael Umahi Women for Akubaroha 2019. This visit by the mother of Ebonyi state is a home-coming because with its unique and enviable status as The Land of God, it naturally follows that a child of God like the first lady of Ebonyi state cannot be regarded as a stranger in Ohaukwu!

Right from creation, women have played useful roles in shaping positive and this is what Ohaukwu and Ebonyi women are set to do in 2019.

Governor Umahi's projects like the 500 kilometer rigid-pavement Abakaliki urban road network, the Hilltop-Nwofe Agbaja as well as other roads across the entire landscape of Ebonyi state, the agricultural revolution which has yielded food security and made farming both profitable and an alternative source of income, the Waste Recycling plant with 3000 job opportunities for Ebonyi youths, the 3 modern flyovers and the total transformation of Abakaliki into a modern capital city and pride of Ebonyi people are the reasons for their support for the second term project of Governor Umahi. Furthermore, other projects like the meaningful empowerment of widows, youths and civil servants without regard to political affiliations; the street lights in the entire Abakaliki capital city, 13 council secretariats as well as satellite urban settlements; the resumption of oversea scholarship programme for our youths; the intervention in the reconstruction of three federal roads with a total distance of 54.5 kilometers in Ebonyi state as well as the unprecedented stomach infrastructure programme through which over 600 Ebonyi men, women and youths have been engaged as Senior Technical Assistants, Technical Assistants and Liaison Officers and the industrial revolution which runs on the single-digit loan facility engendered by Governor Umahi's partnership with the Bank of Industries are the reasons for this support for Governor Umahi.

In particular terms, Ohaukwu women are celebrating Governor David Nweze Umahi for breaking the jinx in the construction of Ezzamgbo - Effium road had become. For the first time, the road is being constructed on rigid pavement to last for generations yet to be born. In the same vein, the secretariat of Ohaukwu local government area and other satellite settlements like Effium have street lights which apart from its ambience in the nights have come in handy to aid security of lives and property in Ohaukwu. Added to these are the positive impacts of the Ministry of Boarder Peace and Conflict Resolution in resolving inflamable inter-personal and inter-communal conflicts; the turn-around renovation and equipment of Ezzamgbo General Hospital and the positive roles of Ebonyi Neighborhood Watch which in collaboration with formal security agencies have ensured greater security in Ohaukwu land. The involvement of Ohaukwu sons and daughters in governance through sensitive appointments as commissioners, Special Assistants, Board members, Senior Technical Assistants and Technical Assistants are things of joy. The unprecedented empowerment of Ohaukwu women, widows, youths and intervention in the payment of hospital bills also add up to the reasons for this solidarity for Governor David Umahi's second term.

Governor Umahi's commitment to the enthronment of equity in the rotation of Ohaukwu council chairmanship position which gave rise to Barr Clement Omekannaya Odah's creative and inclusive administration in Ohaukwu is appreciated by the people. Like Governor Umahi who is his mentor, Hon. Clement Odah has opened a new vista of development in Ohaukwu by building 177 lock-up shops and 16 open stalls at Okwor Ngbo market and constructing two blocks of bungalow shops with concrete roof, a 14-room one story block and and a 24-room open shopping complex at Okwor Ngbo market to boost commerce in Ohaukwu council. On the area of infrastructure and social amenities, Barr. Odah graded and filled with laterite the 15 kilometer Effium - Akparata road linking Ebonyi state with Benue state through Ichele; reconstructed the collapsed perimeter fencing of the Council secretariat; drilled 15 hand-pump boreholes [that is one in each of the 15 electoral wards of Ohaukwu] and renovated and gave general face-lift to the council premises and pavilion. Barr. Odah equally sank a borehole with overhead tank at Nkwo Ezzamgbo donkey market; restored electricity at Okwor Ngbo by off-setting the accumulated bill and repairing the damaged transformer and partnered with the State Government to provide three-kilometre street light in Effium.

Odah has equally taken Governor Umahi's agricultural revolution to the hinterlands of Ohaukwu, revving up the agrarian culture of the people and thus enhancing food security. Odah has also enforced regular environmental sanitation exercises in all parts of Ohaukwu L.G.A. and keyed into the security agenda of the Divine mandate administration by ensuring security of lives and property within Ohaukwu. Through the assistance of the security-conscious Governor of Ebonyi state, Odah has brought to an end the hostilities between Ngbo and the Agila people of Ado L.G.A. in Benue state. In the fashion of Governor Umahi, Barr Odah has put smiles on the people's faces by empowering Ebonyi youths, widows and women through appointment of various Special Assistants and provision of start-up capitals for small-scale businesses, periodic assistance to offset medical bills of medical prisoners et cetera.

For all these and more, the women of Ohaukwu are standing up under the auspices of Rachael Umahi Women for Akubaroha 2019 like Queen Esther, Deborah, Ruth and Mother Mary in the Bible to be used in establishing God's will in Ebonyi state. Hence, they affirm that given the history of democracy in Ebonyi state and, above all, the excellent achievements of Governor Umahi in 32 months, Governor Umahi should be supported to continue till 2023! The potency of this type of affirmation by the women folk as demonstrated in Aba in 1929 is still fresh in our minds. The facts that Ohaukwu women are together with the rest of Ebonyi women, their spouses, sons and daughters in their support for Gov. Umahi's second term project and the fact that the almighty God is the God of justice and equity all make Governor Umahi's 2019 project fait accompli.