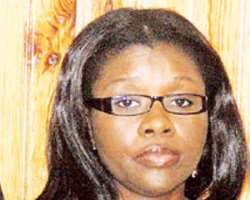 A 12-man jury headed by Judge Christopher Hardy had last week found Ibori-Ibie, the only surviving sister of the former governor guilty of nine counts of money laundering, mortgage and wire fraud.

Onuigbo was convicted for only money laundering in a case number T20087009.

Both convicts were remanded in prison at Hardy's order immediately the guilty verdict was passed by the jury.

A third accused person, Mrs. Bimpe Pogoson, who was Ibori's personal assistant, was discharged and acquitted by the jury.

An online news agency, THE WILL, reported on Monday that the sentencing did not go without a drama at the courthouse.

Another Nigerian online news agency, Saharareporters, which put the number of Nigerians at the court at over 150, said that before Hardy read the judgment, the lawyers to the two women pleaded with him to temper justice with mercy.

The agency added that the lawyer told the court that Ibori had a 'pervasive influence over the entire Nigerian government structure' that Ibori-Ibie and Onuigbo 'couldn't have rejected his overtures.'

According to the report, Hardy rejected their pleas and came down hard on the Nigerian judiciary, saying that it (judiciary) had 'been usurped by Ibori.'

The judge said that Nigerians were the victims of the money laundering allegations against Ibori and not the two women who lived a life of luxury off them .

The agency added that Hardy pointed out that Ibori-Ibie and Onuigbo knew exactly what they were doing and, therefore, couldn't be described as victims.

After the sentencing, the Nigerians in attendance jubilated outside the courtroom.

Late last year, a Federal High Court judge in Asaba, Delta State, Justice Marcel Awokulehin, set the former governor free after throwing out the 170 charges of corruption brought against him by the Economic and Financial Crimes Commission.

Ibori, who went underground after he was declared wanted by the EFCC over a petition by Delta Leaders, Elders and Stakeholders Forum, was arrested in Dubai, United Arab Emirates.

He was arraigned but was granted bail in the oil-rich emirate. The Metropolitan Police of London at which instance he was apprehended in Dubai, is currently seeking his extradition to London.

The sentencing of Ibori-Ibie and Onuigbo coincided with the disclosure by the EFCC Chairman, Mrs. Farida Waziri, on Monday that she had reported some judges handling the cases of corruption against some former governors to the Chief Justice of Nigeria, Justice Aloysius Katsina-Alu, and the President of the Court of Appeal, Justice Isa Salami.

Waziri, who spoke during a news conference in Abuja to mark her two years in office, said her petition to Katsina-Alu and Salamai was as a result of the unusual delay in the trials of the ex-governors, spanning over three years.

Another reason for the petition, according to her, is the 'frivolous injunctions' obtained by some of the ex-governors against the commission, in an apparent attempt to frustrate their prosecution.

The EFCC boss explained that the former governors' trials were not moving as fast as expected, stressing that delay tactics employed by the accused persons were worrisome and 'frustrating.'

Waziri said, 'The governors' cases are not moving fast; in fact, is frustrating. They bring all sorts of technicalities and challenge the jurisdiction of the commission to try them.

Eleven ex-governors are standing trial on allegations of corruption while they were in office, out which Waziri inherited eight cases. Only the former governor of Edo State, Chief Lucky Igbinedion, has been convicted.

One of the cases bothering the commission is the perpetual injunction secured almost three years ago by a former governor of Rivers State, Dr. Peter Odili, to prevent the EFCC from arresting him. Waziri said that the EFCC had engaged a Senior Advocate of Nigeria and two others to ensure that the injunction was vacated.

She added that the commission had appealed the quashing of the 170-count charge against Ibori by the FHC in Asaba.

A total of N9.2bn is involved in the Ibori charges, according to an EFCC booklet, entitled, Our milestones.

'Without taking his plea, the suspect applied to quash the charges; the prosecution opposed the application but the trial judge quashed the charges on December 19, 2009,' Waziri said.

Although Turaki, whose case involves N36bn, has taken his plea, his lawyer raised a preliminary objection to the charge, lost at the trial court but appealed to stay trial.

'It is part of the usual attempt to prolong trial,' the EFCC chairman claimed.

Also, the former governor of Enugu State, Dr. Chimaroke Nnamani, is being tried on a 105-count charge involving N5.3bn. Although he has been on bail since 2007, the case is stalled because of his lawyer's application for the case to be transferred to another judge. This is based on an allegation of bias against the trial judge at the Federal High Court, Lagos.

Apart from the ex-governors' cases, Waziri said, 'Since we took over about two years ago today, we have not only instituted over 50 high profiles cases, we have also secured over 100 convictions with a record of recovery that towers above $3.5bn and over 1,200 cases pending in court.'