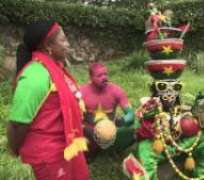 The Director General of The National Agency for the Prohibition of Trafficking in Persons (NAPTIP) says the agency has engaged local witchdoctors in Benin city, Edo State, in its effort to stop trafficking in persons.

The Director General of the agency, Dame Julie Okah-Donli, disclosed this at a symposium in Abuja  on Monday  titled:” Combating the scourge of human trafficking in Nigeria: The journey so far”, organised for NAPTIP officers in conjunction with Conference of Western Attorneys General and the African Alliance Partnership.

Edo state has the highest number of traffickers and victims of human trafficking in the country.

Okah-Donli said investigations revealed that some local witchdoctors were promoting practices that encourage youth involvement in trafficking of persons to Europe.

“When we gathered these witchdoctors recently to sensitise them on what human trafficking victims go through in Europe, they were shocked.

“And they have made their commitments to work with us to fight the menace of human trafficking,” the NAPTIP boss said.

She said that the agency would involve and sensitise more witchdoctors in Edo and other parts of the country and make them NAPTIP ambassadors in fighting human trafficking.

Explaining witchdoctors adverse role, Okah-Donli said that once human traffickers got a victim's consent by force, fraud or coercion, such person would be made to take a oath of secrecy and allegiance before a local witchdoctor in a shrine.

According to her, some rituals are performed on the victims where the potential victim's urine, pubic hair, finger nails, eye lashes, menstrual blood, underwear and other personal effects are collected.

“The ritual is performed with a symbolic animal or bird, mostly a white cock or white pigeon complemented with kola nut,” she said.

The rituals, she said, are a bond between the victims and traffickers.

“In spite of the rituals and oath taking, the victim reaches the destination point only to realize the farce behind the earlier sweet promises of a greener pasture.

“And in this circumstance, such person is told in strict terms not to renege on the oath of secrecy as it cannot be reversed,” the NAPTIP DG said.

Okah-Donli said that other factors facilitating human trafficking are poverty, large family sizes by those who cannot afford to cater for so many children, youth unemployment, collapse of social safety nets, increase global demand for illicit sex, breakdown of cultural values, and the lucrative nature of certain crimes.

She warned that the main objective of traffickers is to use their victims for criminal purposes and exploitation.

She pledged the agency's commitment and determination to defeat the scourge of trafficking in persons, adding that the agency has secured 358 convictions so far .

In his remark, a board member of Conference of Western Attorneys General (CWAG) and African Alliance Partner (AAP), Markus Green said that perpetrators of human trafficking also used it as a cover for other crimes such as money laundering, drug trafficking, etc.

According to him, over $150 billion is generated annually by perpetrators whose activities and crimes pose a serious security threat.